The 74-year-old also has a 40 per cent stake in Laura Ashley, which now has sales of £286 million a year, and is director of Corus Hotels Limited which owns ten hotels including the grand Corus Hyde Park Hotel.

Some more information at the website of The Times.

Certain assets are held by listed Malaysian companies (not by Khoo personally) in the MUI and Pan Malaysia stable (PMI and PMCorp), those companies also have liabilities and are owned by other shareholders.

One should therefore not count the value of the assets but of the shares of these companies, and the share prices of all these companies are languishing, they are all penny stocks.

There have been serious Corporate Governance concerns in all of them, as mentioned in this blog and much more in WhereIsZeMoola.

I therefore get the impression that the above amounts are widely overstated (at least as far as they relate to the assets in listed companies). Khoo Kay Peng is also not listed in the Top 13 of the richest Malaysians. 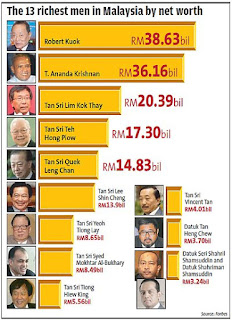