When will Hibiscus bloom?

Interesting interview on BFM Malaysia with Dr Kenneth Pereira, Managing Director of Hibiscus Petroleum Berhad, one of the SPACs listed on Bursa. 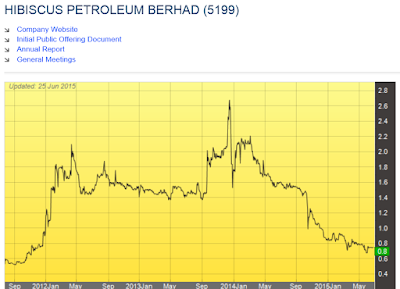 Hibiscus has booked losses throughout its history (except for one year where paper profits were booked under "other profits" due to some revaluation).

That is disappointing, given the fact that the company is listed for four years already, but also given the large amount of hype surrounding its 3D Oil partnership, as for instance described here:


... has demonstrated that its Rex Virtual Drilling Technology significantly increases the chances of success in drilling for oil and gas.

Hibiscus said that tests of the technology conducted over a period of several months by Oslo stock exchange listed North Energy.

It showed that Rex Virtual Drilling technology repeatedly and accurately predicted the presence or absence of oil without physically drilling a well.

Rex Virtual Drilling is a software-based tool which relies on the phenomenon of resonance in seismic data to detect hydrocarbon deposits and predict oil quality as well as in-place volumes.

The Rex technology package is available to Hibiscus’ jointly-controlled entity, Lime Petroleum Plc, which has exclusive use of the Rex Technology package for all concessions in the Middle East and in Norway on a project basis.

The licensing agreement which gives Lime exclusive use of the technology in 15 Middle East countries is for a period of 5 years from 24 October 2011, with automatic annual renewal thereafter.

In some eight ‘blind’ tests conducted on previously drilled wells in the Norwegian Continental Shelf by North Energy, the technology was successful in all cases in predicting whether each well was dry, had traces of oil or if it had substantial oil reserves.

Hibiscus had also done its own blind tests with successful outcomes.


I have been very sceptical about SPACs from day one and see no reason yet to change that stance.
Posted by M.A. Wind at 09:21