Fight between Cyrus Mistry and Tata: AirAsia and Singapore Airlines are mentioned (2)

Andy Mukherjee from Bloomberg has written about the controversy:

Ratan Tata Has a Case to Answer


Cyrus Mistry's letter to the board that fired him as the chairman of Tata Sons Ltd. without so much as a thank-you note for his service is such a big hit on WhatsApp message groups that some publishers might already be dreaming of a tell-all book by the jilted Indian executive.

They'll have to wait. For now, the five-page missive, obtained by Bloomberg News Wednesday, contains all the clues there are for investors to try and unravel the mystery behind Mistry's sacking, a dismissal so summary that it must be "unique in the annals of corporate history," he says.

A few such hints of disappointment aside, Mistry's is not a whining memo. If anything, the parts where he shines a light on the sorry shape of some of the operating companies in the $100 billion empire -- not to mention the alleged lack of professionalism in the group's Bombay House headquarters (the dean of Harvard Business School acting as postman) -- should be an eyeopener.

Most investors have long believed that the conglomerate adheres to a stronger code of governance than other Indian family-run businesses. Now it's up to Ratan Tata to reassert that exceptionalism. The founding-family scion carried out the coup against Mistry, and has returned as interim chairman. But if he can't convince public shareholders and bondholders that the Tata group is more than the mere sum of his personal ambitions and idiosyncrasies, then a lasting discount could creep into valuations.


Related to Air Asia's Indian subsidiary, there has been criticism before, for instance here:

One accusation (of several) is regarding the leasing of airplanes:


Other mails indicate that AirAsia India may have a received a raw deal while leasing aircraft from AirAsia Bhd. For instance, old Airbus A320s were priced almost the same as new ones. One A320, made in 2009, and registered as VT-BLR, was leased for $320,000 per month; another, VT-ATF, manufactured in 2014, was leased out for $315,788. The prices do not match the prevailing rates provided by an independent consultant. The leased cost of an Airbus A320 aircraft (February 2010 make) is about $235,000 per month. A 2013 make costs about $280,000, according to data from aviation consulting firm CAPA. Expensive aircraft can mar the costs of a start-up airline and Bhatia seems to have raised this in an email last April.


If the above is true, then the beneficiary would be the leasing unit of Air Asia, exactly the one they plan to spin off.

CLSA wrote about the issue of revenue recognition in their CG Watch 2016 report: 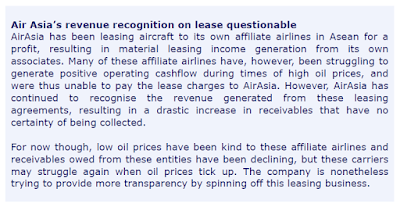 Air Asia is one of the rare home grown regional success stories. It really should start improving its corporate governance though. Being allegedly linked (in Cyrus Mistry's email) to "fraudulent transactions" and "ethical concerns" is embarrassing.