The Employees Provident Fund (EPF) recorded a realised loss of RM203.18mil from its investment in Felda Global Ventures Holdings Bhd (FGV) as at August last year.

In a written reply to Dr Ko Chung Sen (DAP-Kampar), the Finance Ministry said, however, that EPF had gained a dividend income of RM105.77mil.

The assumption that most readers will make reading the above is that the loss EPF made on the FGV investment was RM 203 Million, that EPF did however receive RM 106 Million dividends, for a total loss of RM 97 Million.

There is one "tiny" problem with the above: the assumption has to be wrong.

EPF must have lost much more on their investment in FGV, my guess is around RM 600 Million, so after adding the dividend of RM 106 Million about RM 500 Million.

The confusion comes (most likely) from losses that EPF had already booked in previous years on the FGV investment. How much these losses were is not revealed.

By mentioning the dividend income of RM 106 Million (which is the total dividend received by EPF over all years), the confusion is further increased. Mixing losses over a limited time with dividends over the lifetime in one paragraph without any further explanation does not seem like a good idea.

My reasoning behind the estimate of much larger losses can be derived from the share graph of FGV: 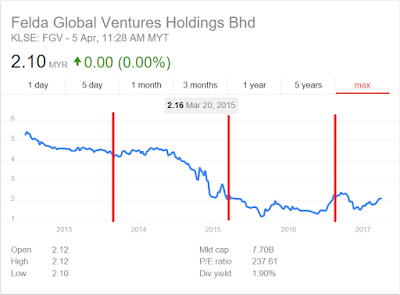 The second phase (September 2013 until March 2015, between the 1st and 2nd red line) EPF had disposed 110 Million shares, it will definetely have lost money on these trades, but still limited.

The third phase (April 2015 until August 2016, between the 2nd and 3rd red line) is the really painful one, EPF disposed of 199 Million shares and received on average clearly less than RM 2 for these shares, the losses in this phase alone must have been more than RM 500 Million. It is this 3rd phase which makes it obvious that the reported loss of RM 203 Million does not cover all losses.

After adding the RM 106 Million in dividends received and subtracting expenses occurred (brokerage, operational) the losses will be substantial to the tune of about half a Billion RM, much more than the implied losses of RM 97 Million. And that is even without taking into consideration the rather large opportunity costs.

I hope that in the future we can have more clear statements regarding financial matters.