Tycoon Ananda Krishnan and his bumiputra partners will sell roughly 15% of offshore services provider Bumi Armada Bhd in private placements to local and foreign institutional investors in a deal that will raise close to RM 2 billion.

Financial executives involved in the placement told The Edge Financial Daily that the sale of roughly 440 million shares in Bumi Armada would cut the joint holdings of Ananda and his bumiputra partners to 55% in the company.

"It [the deal] will widen our shareholder base and raise a little money" said one financial executive.

I have written before about Bumi Armada, where minority investors were forced out under the (in Malaysia infamous) "delisting and compulsory acquisition threat". The total amount of money that minority investors missed out on is a staggering RM 2.5 billion.

To call these unbelievable large amounts of money "a little money" is simply an insult to the (tens of) thousands of investors (who invested either directly or indirectly through unit trusts and the like) in Bumi Armada, who were forced out in the past.

To give an idea about the size, below is how RM 1 Billion looks like, with each note being worth RM 100. 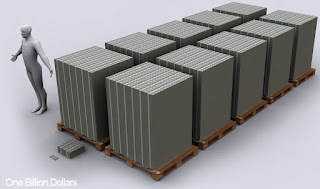 Is it any wonder that Malaysia scores so badly in the GINI-coefficient, measuring the inequality in family income in a country?﻿

I have fought the unfairness of the General Offer of Bumi Armada by filing a complaint to the Securities Commission. I attached a detailed list of the many shortcomings in the brochure. After three years I finally received an answer from Bursa Malaysia, one single line of text, nothing was wrong, not a single explanation whatsoever offered on the many issues that I had raised.

When Bumi Armada relisted in 2011, it left out in the brochure all the information about the low offer price and the delisting threat in 2003.

Both the Securities Commission and Bursa Malaysia have lately expressed their surprise about the low participation by retail investors in the local sharemarket. I don't think they should be surprised at all, they bare a lot of the responsibility for that.
Posted by M.A. Wind at 11:31