Feedback on the Corporate Governance Blueprint 2011 from Claire Barnes:

I welcome the declaration that "the cost to the market of over-dependence on regulatory discipline can be disproportionate to the benefits. It can result in regulations being overly prescriptive, additional costs to the market, and may foster a box-ticking culture. For this reason the SC is always guided by the principle that there should be no more regulation than necessary." (p.61)

Indeed I see excessive regulation as a significant threat to innovation and economic wellbeing, for society overall. It is certainly possible for "unproductive activity" to grow to the point where it crowds out "productive activity"; and although this is hard to measure, I believe that several mature economies may have reached this inflexion point.¹

In the specific field of Malaysian corporate governance, I believe that reintroducing a Continuing Professional Education requirement for directors (p.41) is a retrograde step.² Good directors have many other calls on their time: time spent on courses is likely to mean that much less time available for the strategic affairs of the company.

My impression is that the recent swelling of formalised compliance obligations and of the corporate governance sections of annual reports in Malaysia has been accompanied by a reduction in both extent and quality of the Management Discussion and Analysis text, the most important annual disclosure to shareholders of the current state of the business, principal challenges, and strategic priorities!

Accordingly, while I welcome the "greater focus on substance in terms of meeting corporate governance requirements" (p.47), there may be a danger that it is interpreted by expanding the number of words devoted to the formal CG regulations, when what is really required is a greater focus on the good governance of the company: sensible strategies, good disclosure, and equitable treatment of different stakeholders." 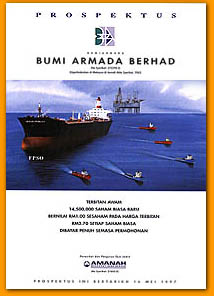 I fully agree with the above. As an example, the IPO document of recently (re-)listed Bumi Armada can be found here:

It contains 600+ pages, is there anybody who actually reads such a document?

And most alarmingly, there is no mentioning at all what happened in 2003 when the company announced a General Offer with "delisting threat", discontinued its dividend without giving a reason (which is not allowed and can be seen as a way to pressure Minority Investors), issued a prospectus with lots of important information missing, containing an "independent" report that was (as always) useless because of its biased views and hardly giving Minority Investors any time at all to take action.

The company subsequently mandatory acquired the remaining shares at a paltry PE of 7, despite being one of the highest quality companies of the Bursa Malaysia (which was trading at an average PE of 15). Corrected for all subsequent bonus and right issues this works out to about RM 0.20 per current share.

The company was relisted again in 2011 at a PE of about 20 (despite a much weaker balance sheet and dilution due to ESOS scheme), and is currently trading for about 20 times the prices of 2003. Why were Minority Investors forced out, why were they not allowed to share in the growth? The total amount of money that the Minority Investors missed out on (and which all ended in the pockets of the Major Shareholders) is a staggering RM 2,500,000,000.

I am sure current Minority Investors would be very interested to know how (badly) previous Minority Investors were treated in the past. Also which commitment there is from the Major Shareholders not to do the same delisting "trick" as happened in 2003. However, despite 600+ pages, there is no mentioning at all of this important information.

In general: quantity is no substitute for quality. Minority Investors want good quality, non-biased prospectuses, with truly independent advice, not what is currently delivered. Bursa Malaysia should enforce this and actively punish writers of documents that are biased or where important information is left out. Shockingly, I haven't found a single piece of evidence that they actually do that. And that explains why the prospectuses and reports (especially the "independent" ones) are of such a poor quality.

More about the delisting of Bumi Armada can be found here:
http://whereiszemoola.blogspot.com/search/label/Bumi%20Armada
http://www.apolloinvestment.com/pirates.htm
Posted by M.A. Wind at 10:00