Claire Barnes wrote in the second quarter report of the Apollo Asia Fund about the puzzling revision in Malaysian oil statistics: The imprecision of vital statistics.

I recommend the reader to read the full article, here are some parts of it:

There has been much recent discussion of Chinese statistics, but I have seen none at all on an interesting revision to BP's data on Malaysian oil production and consumption. BP's annual 'Statistical Review of World Energy' has become a principal source of information on primary energy trends: the latest version may be found at www.bp.com. The Energy Export Databrowser provides helpful charts based on this data.

Compare the chart on the left, based on data in BP's 2010 review, with that on the right, based on its latest review: 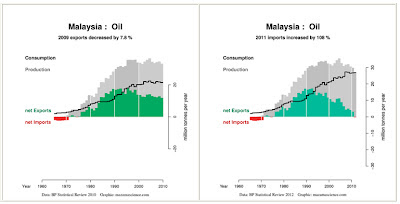 These charts, and many others, can be found on this website: Energy Export Databrowser

The earlier chart shows Malaysia's oil production on a plateau since 1995, consumption levelling out since 2002, and a gradual reduction in net exports. The chart from the latest data shows a much more alarming picture: falling production, a continued rise in consumption, and a rapid collapse of net exports.

2011 was a poor year for Malaysian oil production, due partly to temporary factors. Bank Negara reported a 10.7% decline (v BP's 10.9%) and attributed it to 'shutdowns of several production facilities for maintenance purposes, declining production from mature fields, and lower-than-expected production from new fields'. The trends in recent years are comparable in the two sets of statistics. Unexplained are the major revisions to BP's historic data series. Over the last two years, BP has revised downward the production figures back to 1984, but particularly since 1995; and revised upwards the consumption figures since 1994, but by escalating amounts since 2000, particularly since 2006. Unfortunately, 'BP regrets it is unable to deal with enquiries about the data', and we cannot find current consumption figures in any Malaysian source.

﻿Malaysia's decades of prosperity have coincided with a great energy windfall. When oil production ceased to grow, gas production continued to soar - but that has now ceased. The chart on the left suggests the magnitude of the changes which may now be under way. It is based on the latest BP review, and includes figures for hydropower (small) and biofuels (insignificant). According to BP, Malaysia's primary energy production, in million tonnes oil equivalent, peaked in 2008: three years later, it was down 9%. Malaysia's primary energy consumption continued to rise until 2010 - but in 2011, gas shortages began to bite in the Peninsula; BP shows domestic gas consumption down 10.5% for the year. Net primary energy exports peaked in 1999; they are since down 54%.

Without BP's recent data revisions, the decline in net exports would be less steep, but still significant. The issue is surely of huge importance to the economy, the government budget, and the patronage machine. One would expect such issues to feature prominently in public debate, but there is little awareness or discussion. To some extent, growing demand reflects an attempt to add value locally rather than exporting raw commodities - but is this always a wise use of a dwindling resource? There are some moves to phase out energy subsidies by gradual increases in gas prices to industrial users, but no apparent Plan B for what happens if the market price continues to outpace the planned increases. Fuel and electricity prices are politically sensitive, so no rational discussion occurs, and profligacy continues. Meanwhile, moves to encourage development of Malaysia's marginal fields seem sensible, but are they likely to stem the decline?

Indonesia became a net importer of oil several years ago, and its oil-and-gas production peaked in 1997, but the remarkable growth in coal output has led to a continued rise in primary energy output and net exports (right hand chart above). While the coal mining sector has received plenty of attention from investors, it is interesting that the decline in primary energy exports from 1996 to 2003 coincided with a period of very poor performance for the Indonesian stock market, and the subsequent surge in primary energy exports has coincided with the prolonged boom.

Energy policy in Indonesia is certainly no more coherent than in Malaysia, but the musings of ministers do at least range more broadly, which may perhaps allow hope for change. Indonesia, Malaysia and India suffer from the distortions and misallocations caused by energy subsidies: reforming these would be a good place to start.

Postscript 18 July:
The spreadsheet has been expanded with data from the US Energy Information Administration (EIA, www.eia.gov) and from the Joint Organisations Data Initiative (JODI), which broadly agree with the current BP picture of a rapid decline in Malaysia's oil production. JODI and Bank Negara both give monthly statistics, and JODI's show a much steeper decline 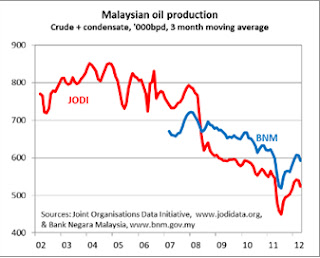 BP's consumption figures are for a broader range of products than its production figures. Its world oil consumption figures exceed its production figures by a growing margin, as shown in this blog post. Nevertheless, the revisions to production and consumption for Malaysia are unusually large, and remain unexplained. One guess is that a shift from net exports to net imports is more visible to the market than a mere change in net export level, and that the statisticians then have to reconcile their historic figures with the new facts while avoiding the assumption of too drastic a change in one year. While statistical details remain unclear, this affects only timing. The long view already provides cause for concern, but this may be playing out faster than expected.


The fat years for Malaysia were between 1983 and 2005, when production (grey) clearly outpaced consumption (black line), resulting in a large net export (green) of about 10 million tonnes per year. The price of oil was about USD 20 per barrel during those years. 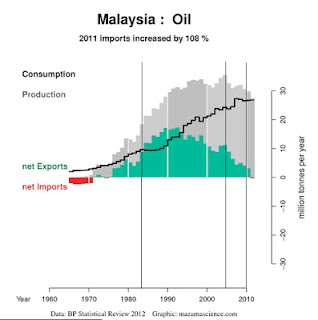 Between 2005 and 2010 the net exports dwindled to about 5 million tonnes per year. But this was more than offset by the rising oil price which hovered around USD 70 per barrel. 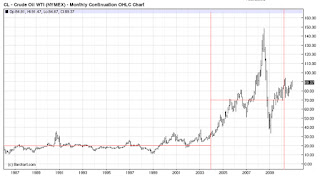 The fat years are over, and Malaysia has turned into a net oil importer. With global oil consumption on the rise, I expect the price in the long run only to rise further. In other words, Malaysia has been exporting oil for decades at a price around USD 20 per barrel, and might have to import oil in the future at a price that is five or ten times that price. Instead of growing a piggybank for the more lean times (like Norway has done), Malaysia's government did choose to run budget deficits for years in a row.

Luckily for Malaysia, it is still a net exporter in gas, although production seems to have slowed down a bit in recent years: 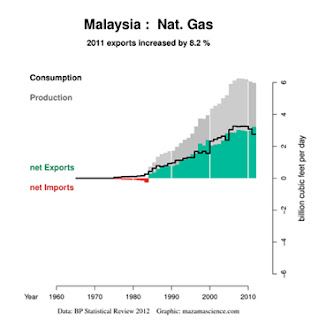