Interesting article on the Malaysian Insider website suggesting that Sime Darby has to make a general offer for E&O shares after all.

The crux of the matter: "A general offer can also be triggered if a new party buys less than 33 per cent but secures management control of the target company".

However, according to an article on the website of The Star

Sime Darby Bhd does not have to make a general offer for the remaining shares in Eastern and Oriental Holdings (E&O) after it acquired a 30% stake, according to the Securities Commission.

The SC said in a statement on Friday that its position on the GO requirement in the Sime Darby-E&O acquisition remained unchanged as per the statement issued on Oct 11, last year.

"The decision is now subject to judicial review which is pending in court," the SC said.

Securities of E&O surged in active trade late Friday on a news portal report that the SC would now order Sime Darby to make a GO for the remaining E&O shares. 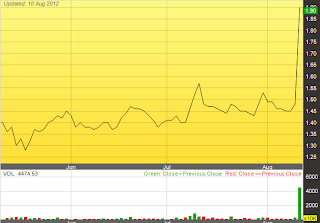 Looks like the authorities have another possible case of insider trading to deal with since there has been no official announcement.

In a volte face (Wiki: a total change of position, as in policy or opinion; an about-face), the Securities Commission (SC) will now order Sime Darby Bhd to make a general offer for Eastern & Oriental Bhd (E&O) shares after buying a 30-per cent stake last year, say government sources.

The Malaysian Insider understands the decision was made after a review by the leadership under new SC chairman Datuk Ranjit Ajit Singh.

“The SC has reviewed the matter and decided to overturn the earlier decision made when Tan Sri Zarinah Anwar was the chairman,” a government source told The Malaysian Insider.

Ranjit, who was the SC managing director, took over as chairman after Zarinah ended her term last March 31.

Another source confirmed the review and said the decision will be made public soon.
Sime Darby purchased its controlling 30 per cent interest in the property developer from three major shareholders — managing director Datuk Terry Tham, Singapore’s GK Goh Holdings and a group of investors led by businessman Tan Sri Wan Azmi Wan Hamzah — at the end of August last year in a deal that valued E&O shares at RM2.30 a piece.

The purchase price represented a 60 per cent premium over the value of the shares in the company on the open market when the deal was announced.

The RM776 million deal triggered unease over the widely-perceived coddling by the agency of large state-controlled companies at the expense of minority shareholders when exercising its authority on corporate takeovers.

The legal suit has renewed debate over the SC’s handling of alleged irregular trading activities and had put pressure on Zarinah, whose husband — the E&O chairman — had raised his personal stock holdings in the company just weeks before Sime Darby announced the acquisition.

The SC has also filed an application to recuse the judge hearing the suit as he used to be with the regulator. But the judge dismissed the application, only for the SC to file an appeal with the Court of Appeal, which heard the case yesterday.

Singapore’s Straits Times reported last January that a SC task force found that Sime Darby was obliged to make a general offer for E&O shares after acquiring a 30 per but was superseded by the regulator’s top ruling authority.

The daily reported that the task force was of the view that a general offer obligation had been triggered as a new “concert party” was created between Sime Darby and Tham, who jointly controlled more than 33 per cent in the property concern after the deal.

Malaysia’s takeover rules stipulate that any party that acquires more than a 33 per cent interest in a publicly-listed entity must carry out a general offer for the remaining shares.

A general offer can also be triggered if a new party buys less than 33 per cent but secures management control of the target company.

But the SC’s final ruling three-member committee adjudged “in a majority decision” that there was no general offer obligation as Sime Darby and Tham were not acting in concert, according to an affidavit by the agency’s second-most senior commissioner Datuk Francis Tan, which was sighted by the Singapore daily.

The committee also accepted the task force’s recommendation that the three groups that sold the blocks of E&O shares to Sime Darby did not collectively control the company and that the disposal did not trigger a general offer.