Genneva taken to court by customer 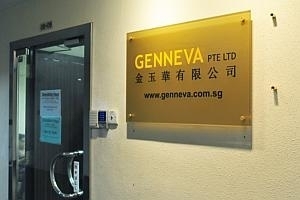 Genneva Pte Ltd, a gold trading company offering a "buyback" scheme, appears to be in hot water. At least one customer has recently won an interlocutory judgment against it in the Subordinate Court, pending an assessment of damages. It remains to be seen, however, whether she will recover her claim of about $190,000. Genneva failed to respond to the writ of summons or to contest the case.

A number of other customers are also looking into launching a lawsuit against the firm for its alleged failure to honour its part of the agreement to buy back gold. One group of about 60 customers, representing a total of roughly $10 million in gold purchases, is understood to be consulting lawyers.

Genneva is on the Monetary Authority of Singapore's Investor Alert list of unlicensed entities. Its scheme basically sells gold to customers at a hefty premium of 20-30 per cent. Customers, however, are told that they enjoy a "discount" of about 2 per cent off the headline price.

They are given the option to sell back the gold after a pre-agreed term of one month or three months. The gold can be sold back at the headline price and customers get to pocket the so-called discount. Assuming monthly rollovers, this could mean a return of as much as 24 per cent a year.


Genneva's model appears to fall into a grey regulatory area. Because there is typically a physical purchase of gold, the company is not classified as an investment adviser. The so-called discount that customers are extended is also not described as a yield or return.


The above snippets from Singapore Business Times. Surprising that so many people seem to fall for these kind of schemes, although low interest rates will be one factor. However, promising 24% returns per year (cumulative even 27%) is way above what Bernie Maddoff offered. Surely some people should have been suspicious, if something sounds too good to be true, normally it is.

Bank Negara's alert can be found here and the same for the Monetary Authority Singapore here.
Posted by M.A. Wind at 21:31

Email ThisBlogThis!Share to TwitterShare to FacebookShare to Pinterest
Labels: Genneva