MSWG commented on the recent issuance of Puncak Niaga Holdings:

"This week we saw Puncak Niaga Holdings Berhad seeking approval from shareholders for an issuance of redeemable convertible secured Sukuk Ijarah, which despite the lack of information and clarity on the utilisation of proceeds, went through by poll vote. Several institutional shareholders and a large number of the retail minority shareholders, making up 23.7% of the total vote, had voted against the proposal. We were surprised that the Circular did not carry sufficient pertinent information for shareholders to make an informed decision. The Principal Adviser and Independent Directors were grilled by shareholders at the EGM. We hope the authorities will set a minimum standard requirement for fund raising, otherwise the onus should be on the Principal Adviser to advise the company to get clear and sufficient information for informed decision to be made by shareholders. Independent Directors must take that extra care to enable shareholders to make this decision, otherwise they ought to reject the proposals at the outset (See Quick take for further details)."

That sounds all very worrisome. Bursa Malaysia should really look into the quality of the circulars and insist that minimum standards of disclosure are met. It should also not hesitate to punish errant Principal Advisers, Bursa has been much too lenient in the past.

In "The Observer" (only for subscribers) MSWG gave the following details:

In the BFM radio show, Puncak Niaga was singled out as one of the cases where directors were overpaid.

According to the just released annual report, Tan Sri Rozali earned more than RM 33 million in 2012 in the form of renumeration: 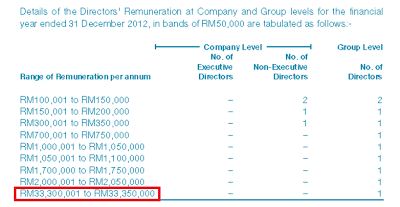 Although the company did make a profit over 2012, the same can not be said about each of the four previous years.

Just for comparison sake, the total amount of money that all shareholders received through dividends was only RM 20 million. And with that they should already be content since the dividend in the previous year was zero.
Posted by M.A. Wind at 20:27