The Securities Commission announced the following:

Both Ranhill and Tan Sri Hamdan, Executive Director/President and Chief Executive of Ranhill, were found to have breached section 215(3) read with section 354(1) of the Capital Markets and Services Act 2007, for failing to immediately inform the SC of the suspension of the licence issued by Petroliam Nasional Berhad to Perunding Ranhill Worley Sdn Bhd (PRW), a company controlled by Tan Sri Hamdan. The notice of suspension was received on 17 July 2013.

Ranhill relies on PRW for contracts secured from PETRONAS. This contract represents a material contribution to Ranhill Group’s revenue. The suspension of the license is therefore deemed as a material change in circumstance as it poses potential adverse implications on Ranhill’s oil and gas business. Under the circumstances, Ranhill and Tan Sri Hamdan were required to immediately inform the SC of the material change in circumstance under section 215(3) of the CMSA as the earlier disclosures in the listing prospectus of Ranhill would no longer be considered accurate or reflective of prevailing circumstances, and possibly misleading.

In the disclosure of such material development in this case, time is of essence, given that the retail and institutional offering by Ranhill had closed, the date for the allotment of shares to successful applicants was approaching, and investors needed to be given the opportunity and time to re-evaluate their investment decision.

SC views timely and transparent disclosure of material information by companies and promoters seeking to raise funds via an IPO, as fundamental to ensuring trust and confidence in the capital market. Companies, promoters and advisers are reminded to exercise vigilance in this regard." 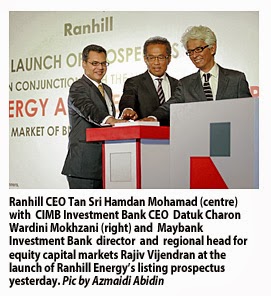 The Star writes about the same issue, some snippets:


A corporate lawyer explains: “It is not so much about the value of the contracts concerned. It is the fact that your licence was suspended or contract cancelled. That’s not necessarily the end of the world but it needs to be disclosed. Any reasonable investor would tell you that this is material information that impacts how he or she views and values the affected company. Non-disclosure therefore is more likely to assume that the offerors were looking to mislead investors.”


"The withdrawal of the listing has also caused other problems. The IPO was meant to raise RM750mil, out of which, Cheval Infrastructure Fund was to receive RM77mil for the shares it was selling. Cheval is acting on behalf of private equity firm Tael Management Co (Caymans) Ltd.
Ranhill Energy’s listing was supposed to be part of Cheval’s exit from the company. In 2011, Cheval together with Hamdan took Ranhill Bhd private at 90 sen per share. Cheval had wanted to pare down its stake in Ranhill Energy to 15.8% post-IPO, from 36.25% before the listing."

Ranhill Energy is another of those listing-delisting-relisting plays that happen much too often at Bursa Malaysia. Bursa should discourage this by invoking a new rule that delisted companies are not allowed to relist in the next, say, ten years.

Let's put things in context regarding the amounts involved:
Punishment is supposed to act as a deterrent. The fine imposed in this case is 1/1500th of the amount of money raised. Although it is good that the SC has taken action, the fine itself hardly seems adequate.
Posted by M.A. Wind at 10:09