Buying on margin is a bad idea, including for employees (2)

First of all, to add to my previous story, The CEO of Bumi Armada has resigned per January 1st, 2015 due to "Family Reasons".


"UBS downgraded its medium term and normalized outlook for oil where its Brent forecast for Q414E/2015E is now at US$77.50/US$69.75 with some recovery to US$80/US$85/US$90 in 2016E/2017E/2018E. In the next 1 year, UBS' forecast is even lower than the forward prices. While we believe that its medium term cash flow is secured by contracts already won, FPSOs are typically used in deeper waters and marginal fields. Hence, in the current environment of volatile oil prices, oil companies could take longer to evaluate projects and award contracts.

Meanwhile, the market could perceive CEO Hassan Basma's resignation on Friday for family reasons (and also the sale of his 4.5m shares in the company since end-Nov) as lack of leadership in the company until the issue is addressed by the board and / or new CEO is appointed."


The company offered pre-IPO a lot of shares (probably at an interesting price) and a lot of options to the CEO.

When the price of oil tanked the share price went down from above RM 2.00 (corrected for the recent rights issue) to the current RM 1.03. 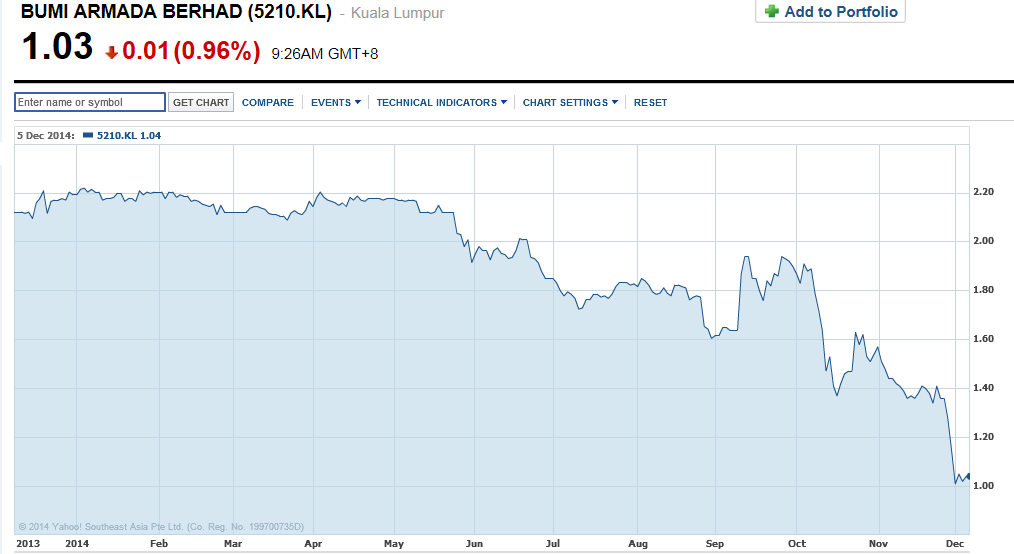 The CEO's shareholding was sold due to margin requirements, he still has "an interest in 50,624,803 unissued shares of Bumi Armada Berhad arising from outstanding options granted to him pursuant to the Company's Employee Share Option Scheme". These options are most likely out of the money and not worth much at the current share price of Bumi Armada.

In other words, although the CEO might have managed the company well, his financial results have been hugely downgraded due to circumstances beyond his control, the price of oil.

It is quite astonishing why the company choose to reward the CEO the way it did. Instead, the company could have given the CEO certain long time targets that are in reach of his control, with an adequate financial reward for reaching them.

And I am afraid the CEO might not be the only one in this predicament, other key persons in the management of Bumi Armada might have received similar structures.

For the minority shareholders, they must hope a good CEO can be found soon.
Posted by M.A. Wind at 09:45