I have written several times about iCapital (of which I am a long time shareholder), most notably here and here.

The two elephants in the room regarding iCapital's share performance are:
The new year report has been published, so I was interested to see how the company handles both matters. Well, the way the issues are handled is best described by the below picture: In the Netherlands this is called "Ostrich Policy": "to ignore obvious dangers or problems and pretend they don't exist; the expression derives from the supposed habit of ostriches to stick their head in the sand rather than face danger".

Lets start with the results for the latest year:

That is really disappointing, given that the funds cash level was a whopping 65% throughout the year. That cash is generating interest of about 3 per cent a year, so one would have thought that the fund would have performed clearly better than the KLCI.

One reason for this is the management fee (including relatively high expenses for advertisements and AGM), the total is about RM 7 Million. That translates to about 1.75% per year, which is not a problem if the fund is fully invested and outperforms. But it is a problem if 2/3rd is held in cash, earning about 3% per year on that cash, of which more than half is eaten away by fees and expenses.

Given the persistent high cash level, the board of directors should renegotiate the management fee, for instance a lower fee for the cash it is holding (one does not need a degree in rocket science to manage a fixed deposit), and a higher fee for the equity part. However, no indication is found in the year report that this is even considered.

All the outperformance of the fund came in the first few years. The last seven and a half years the fund has underperformed, especially if dividends are accounted for. The combined effects of the underperformance and discount is shown in the red column, showing that the share price has actually decreased since December 31, 2007.

One must therefore put question marks behind the comment by the Chairman:

Also puzzling is the comment regarding "shorter-term options which do not benefit share owners in the longer-term", how is it possible that company decides this for its share holders?

On December 31, 2013 the NAV was around RM 3.10 while the share price was around RM 2.47 for a discount of around 20%. Apparently the fund manager could not find enough value and decided to raise cash levels to 50%. If the fund had decided to discontinue and return back the money to shareholders, surely share holders would have been in a much better situation than currently (the share price is now RM 2.18).

There is absolutely no need to seek for viable options to address the discount, they have been conveniently listed in iCapitals IPO brochure, as described in my previous posting:


Another issue is that there seems to be an "obsession" with Warren Buffett and Berkshire Hathaway. Rather surprisingly, since Berkshire Hathaway is a US based fund (and thus accounted in USD, a currency that has performed very strongly relative to all currencies including the RM), investing a lot of money in non-listed companies, and only being interested in large acquisitions while iCapital is focused on Malaysian listed companies (which might include small caps, given its small size).

In other words, if there was ever a comparison between apples and oranges, this would be it.

Another rather interesting issue is that Warren Buffett and Charlie Munger each only charge USD 100K per year in wages, versus USD 1.5 Million (RM 6.4 Million) charged by the fund manager of iCapital, despite Berkshire Hathaway having a market cap of more than a thousand times the market cap of iCapital. 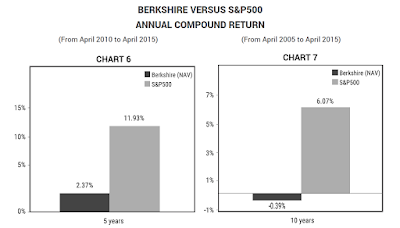 I have no idea where iCapital got these charts from, but they must be completely wrong. One of the best investors in the world has an annual compound return on its NAV of -0.39% over the last ten years?

The reality is very different according to the last year report, despite its huge size it actually was able to book very decent increases in its book value:

Another matter is that Berkshire Hathaway announced the following: 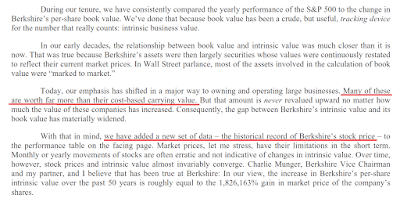 In other words, it might be better to look at the market value of Berkshires shares instead of the (understated, conservative) NAV.


[1] What iCapital should have done (instead of focus on Berkshire Hathaway) is give a clear and correct (that is based on dividends reinvested, it is not giving those at the moment) comparison of iCapitals performance versus similar funds, like the Malaysian ETF or Malaysian equity based unit trusts of reputable fund managers over the last 10, 5, 3 and 1 year periods. That would be comparing apples with apples.

[3] And lastly, it should have openly discussed the expenses and fees, which have been simply too rich in the last years given the high cash levels.


I used to have a lot of sympathy for iCapital and its founder Tan Teng Boo, they have been good for Bursa in areas of educating Malaysian investors. But that sympathy is decreasing each year, at least with me.
Posted by M.A. Wind at 12:45