Kian Joo: the deal is getting cheaper and cheaper ....

Kian Joo announced a good set of results for its second quarter: 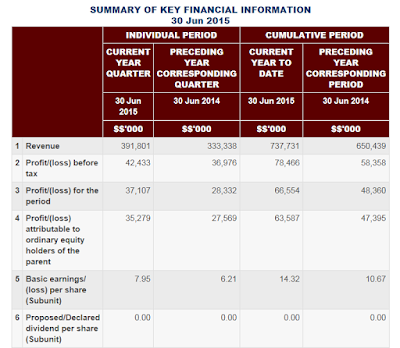 Both revenue and profit are nicely up.

To recall, there is a RPT in which Kian Joo would sell all of its business to Aspire Insight (owned by the the former MD of Kian Joo and EPF), which translates to RM 3.30 per share.

That deal has taken quite some time due to legal reasons, but Bursa has allowed an extension until September 30, 2015.

However, in the mean time no dividend has been paid since 2013, which means that the net assets have grown nicely. The deal looked already cheaper, now even more so.

In the Malaysian context it is very hard to fight these kind of deals. But Datuk Anthony See has a decent stake of about 8.6%, he doesn't like the offer and may be is able to rally the minority shareholders to hold out for a better bid.

The next six weeks will be interesting, both for the minority investors in Kian Joo, and for shareholder activism in Malaysia in general.
Posted by M.A. Wind at 21:05