I wrote before about Vivocom. 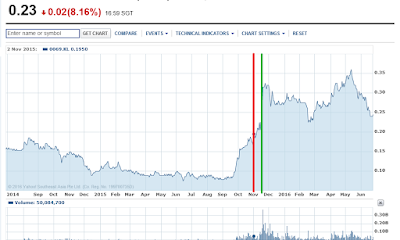 Two important events from the past months:

The jump in share price and volume around those 2 days is very noticeable.

The Edge Malaysia published on June 27, 2016 several articles about Vivocom, one of which hinted at the possible stepping down of Yeoh.

The company however announced: ".... the Board of Directors have not to date received any official letter of resignation nor unofficial notification from Dato’ Seri Dr. Yeoh Seong Mok on his purported intention to resign or retire".

Vivocom has gone through many transitions, will it be this time successful?

Email ThisBlogThis!Share to TwitterShare to FacebookShare to Pinterest
Labels: Vivocom