In my previous postings about this subject I used the FBMKLCI, the 30 heavyweights, based on market cap.

Another index is the MSCI Malaysia Index: "With 43 constituents, the index covers about 85% of the Malaysian equity universe.".

The EPS of this index is pretty similar to the numbers I gave for the FBMKLCI, with the exception that it peaked in 2012 instead of 2014: 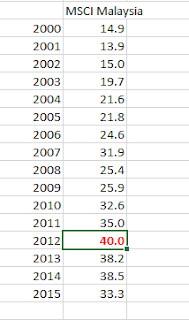 One explanation could be that there were quite a few multi-billion RM rights issues in the last few years, which bolstered the profits for the companies (which I measured in the previous postings), but not necessarily on a per-share basis (as detailed in the above table).

Growth has been steady between say 2002 and 2012, about 10% yoy, but after that have clearly declined, with 2016 being most likely another poor year.

The index has lagged the emerging markets index over the last 15 years:

However, that doesn't mean the Malaysian shares are much more cheaper than those of other emerging countries, in the contrary:

Both on a PE and a P/BV basis Malaysia is actually more expensive, only the dividend yield is somewhat higher.

As one keen observer (of emerging markets and Malaysia particularly) put it:

This support has historically made the Malaysian market less volatile/lower beta vs. regional markets in the past.

Also, corporate governance is probably above average for an EM  - and better than those markets mentioned above.

The cost of capital - driven by lower bond yields - is also lower than the average EM - c.  10% vs. mid-teens or higher for some EMs, which should translate into higher P/Es.

All  these  factors should translate into above-average valuations for the M'sian market relative to EM.

That being said, earnings growth amongst the larger caps has been disappointing over the past few years.