Sona Petroleum is winding up

Article from The Malaysian Reserve:


Malaysian oil and gas (O&G) special-purpose acquisition company (SPAC) Sona Petroleum Bhd pledged to pay shareholders 97% of the funds held in its trust account by November 2016, weeks after the deadline for it to secure a qualifying asset passed on July 29.

The remaining 3% will be paid within two years from then, after deductions for the liquidation and obtaining tax clearance.


That was to be expected. Regarding its last proposed qualifying acquisition:


Canadian oil company Mitra Energy Inc purchased the Stag oilfield in Australia for US$10 million, just three months after Sona Petroleum asked investors to approve a US$25 million deal for the same asset.

Stag, an ageing field that used to be owned by the Australian oil giant, is currently producing about 4,000 barrels of oil per day.

Sona Petroleum came close to purchasing the asset after it received the go-ahead from the Securities Commission Malaysia this year, but investors wary of declining industry conditions voted resoundingly against the buy.

Mitra Energy only paid 40% of the price Sona proposed to pay for the acquisition.

The deal was deemed to be "not fair", so it seems that assessment was pretty accurate.

Current shareholders get back a decent amount of money, but lots of money has been lost, through the many expenses: wages, rental (a rather plush office in Menara Petronas 3), IPO related, etc..

From its last financial results: 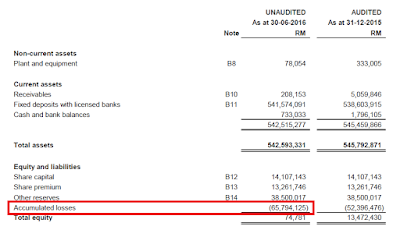 Next to that there are rather high opportunity costs, at the very least the money could have been compounded risk free at 4% interest per year.

Was it all worth it? I doubt it, but then again, I have been skeptical about SPACs from the word "go".