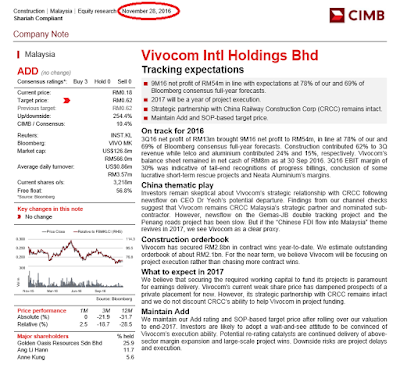 There is one "tiny" problem with this, the company itself has not yet announced its quarterly results.

That is of course a major screw up.

Both from the side of CIMB and from Vivocom.

It also shows that certain parties are privy to inside information, while others (the public) are not. A situation that should be avoided. The question is if this happens more often, a company releasing sensitive information to other parties before the information is officially announced.

I wrote twice about CIMB reporting about Vivocom, here and especially here. CIMB has a rather aggressive price target of RM 0.62 vs current share price of only RM 0.18.