The facts are rather clear:

The share of Can-One suddenly took off in high volume: 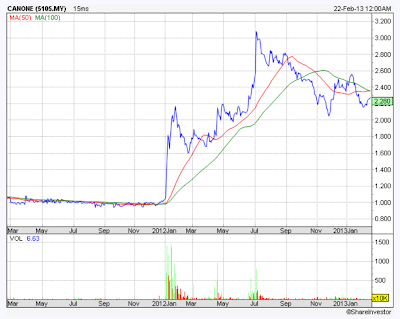 On January 5, 2012 Bursa issued an "UMA" (Unusual Market Activity) query. This is pretty standard when the share price of a company changes a lot.

One day later, on January 6, 2012 however, Can-One issued the following announcement:

"The Board of Directors of Canone is pleased to announce that the Company has on 6 January 2012 been advised by its solicitors that the Federal Court had on 5 January 2012 allowed the Liquidators' Appeals, including the Liquidators' Appeal to proceed with the completion of the sale of 146,131,500 ordinary shares of RM0.25 each held by KJ Holdings in Kian Joo at RM1.65 per share for an aggregate consideration of RM241,116,975.00 to CISB."

Bursa Malaysia was probably not too pleased with the two statements which seem to contradict each other, and concluded:

"CANONE’s announcement dated 5 January 2012 (issued at 7.20 p.m.) was inaccurate, not factual and hence, in contravention of its disclosure obligation under the Listing Requirements.

Bursa reprimanded the company and reprimanded and fined the seven directors each RM 50,000.

Good action by Bursa, also within a reasonable time limit. Too often I noticed the rather "automatic" reply "we are not aware of any rumour/report/explanation" by companies on an UMA query, so a decisive action will hopefully deter future breaches of the rules.

Trading in the share should have been suspended by the company the moment the Federal Court made its decision, giving all shareholders a reasonable time (say one day) to digest the information.

For me just one question remains: why did the directors breach the rules? Just an honest/lazy mistake, a case of miscommunication, or was something else going on, did (any of) the directors benefit from their action?
Posted by M.A. Wind at 11:14