Sentiment towards Chinese listed companies on the Bursa is not exactly very rosy, all are trading at huge discounts compared to their IPO prices.

One of the first companies that has encountered severe problems is HB Global. The list of red flags is too long to mention, just a few examples:
It is also very quickly running through its cash:

But the largest red flag was that in its last audited accounts the auditor wrote a very large disclaimer.

Bursa ordered a special investigation by BDO, and today, finally, a short, but rather surprising announcement was made to Bursa.

"1)   The auditor was able to reconcile the cash balance, trade receivables and trade payables contrary to Paul Wan &Co disclaimer of opinion."

That is really good news for the shareholder, but questions do appear, why is one auditor able to reconcile these items while another can't. Surely BDO must have communicated with Paul Wan & Co? For instance, did both auditors receive the same information?

"2)   Besides the above items under investigation, BDO had also investigated the cost and revenue recognition, paying particular attention to the fixed assets ie property, plant and equipment (“PPE”). In this section, BDO proposed a total impairment of RMB 67.6 million."

But that is not exactly good news, it would turn a profit of RMB 29 million into a loss of RMB 30 million, pretty shocking so soon after its IPO.

The reason given does not exactly make things very clear:

"The provision for impairment of PPE was a result of differences in the market value and the book value recorded in our books for our property, plant and equipment."

Then there is still another matter, regarding the inventory:

"4)   BDO also highlighted that they were unable to carry out the stock count for inventory balance as at 30 June 2013. The carrying amounts of the frozen food items at the old warehouse were approximately RMB 81 million representing 79% of the total inventories as at 30 June 2013. This was because the frozen food items were not properly arranged as well as the entrance to the old warehouse were not easily accessible; alternatively, BDO had checked the goods stock in notes, suppliers invoices, finished goods received notes, monthly production reports, goods stock out notes and sales invoices to determine reasonableness of inventories balance as at 31 December 2012 with no exception noted."

The announcement, so short in content, does end with a very interesting twist:

"In view of the findings by BDO, the management is seeking legal advice with the legal counsel on appropriate action to be taken against the previous auditor."

Shooting the messenger is the favourite sport of many Malaysian VIP's, it looks like HB Global has quickly acquired this local habit.

But before they want to give in to this Malaysian "hobby", may be they should first provide some more detailed information what really has happened. In one foul swoop, going from a profit to a loss, there should be some explanation, and I also like to remind the reader of the following: 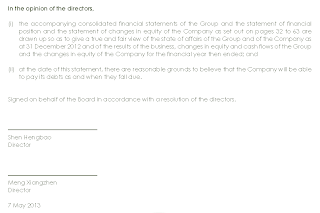 In Hong Kong China Solar ran into some serious problems, three directors (including the chairman) are not contactable because they have been arrested.
David Webb poses the following questions:
"1. Why didn't the auditors know, or note, that the capital of the subsidiaries was not paid up?
2. Why didn't the company announce nearly 2 months ago that the directors were uncontactable?"   ﻿


And "Prince Frog" has after 5 days still not made an official reply on the accusations of Glaucus.


All not exactly confidence boosting events for China based listed companies.
Posted by M.A. Wind at 22:36