The Edge Malaysia published an article "MUI's RM428m puzzle" about the debt of Malayan United Industries Bhd (MUI). Interesting about this case is:


The last announcement about the debt: 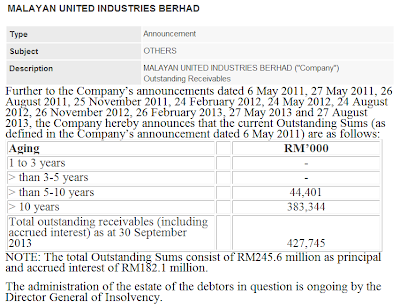 I have written about the group before, most notably:

The link to the Hope Foundation is also mentioned, for instance in the last link:

"[1] The main issue is that the offerors bought their shares from (primarily) the Hope Foundation, and that this price is used for the price offered to the minority investors. But the Hope Foundation seems to be connected to the offeror, there are many indications to be found on the internet, for instance in an article in "Malaysian Business", the previous name was even "MUI Foundation" and the shares it traded in where all connected to the offeror. But if this is indeed the case (and it seems to be very likely), then that means there is a huge conflict of interest, it would be in the interest of the joint offerors to make an offer as low as possible to the Hope Foundation, instead of an arms length offer. It would also explain why a large shareholder (Hope Foundation) would sell its shares for about the lowest price ever. Although this issue seems to be obvious, and the authorities are aware of it, it is never raised in the offer document, not even once. There is simply no mentioning at all of the Hope Foundation."

In the mean time, the CFO of MUI, PM Holdings and MUI Properties resigned "to pursue other career opportunities".

Too many questions, and so far it appears that the authorities have not yet taken any action. The minority shareholders of the MUI group and the public at large deserve some much needed transparency in the above issues.
Posted by M.A. Wind at 13:20