Bernas: are all minority shareholders really treated fair and equal?

Bernas (Padiberas National Berhad) has been in the news lately. The first attempt by companies linked to Syed Mokhtar AlBukhari to takeover and thus delist the company failed, but a second attempt succeeded (at least regarding the latter part). Rather surprisingly, since the offer was exactly the same.

Regarding the offer price, it seems to be rather low for such a cash cow, an opinion that MSWG agrees with, according to this article in The Ant Daily:


According to the Minority Shareholder Watchdog Group (MSWG), a prudent estimate of Bernas’ intrinsic value is RM3.2 bil or RM6.13 per share. At a conservative 8.5-11.5% discount with at least a 2% perpetual growth rate, the indicative value of Bernas is estimated at between RM4.18 and RM6.13.


Then why did some of the minority shareholders change their mind and accept the low offer? Is it possible that some received a better offer than others?

Comments made by Agriculture and Agro-Based Industries Minister Ismail Sabri Yaakob clearly seem to indicate that. In an article "Bernas delisting ‘good’ for farmers, fishermen" at KiniBiz website, the Minister allegedly said (emphasis mine):


.... Bernas has agreed to his request to pay Nafas and Nekmat RM2 million each annually even though they are no longer shareholders and are not entitled to a dividend.

“(This is so) that Nafas and Nekmat will still have consistent financial (support) … So it’s a good deal for them. They are well taken care of,” he said.

Ismail Sabri said he had received a “personal undertaking” from Syed Mokhtar that Nafas and Nekmat will be offered 5% each of the shares, should the company be re-listed in the future.


Similar articles can be found here and here reinforcing that the Minister really said this.

That is all very nice for Nafas and Nekmat, I have zero problems with them being treated generously and receiving more than the low one-off payment of RM 3.70 per share.

But there are many other minority shareholders of Bernas, and according to the rules, they should be treated the same, they should receive the same offer. Thus they also deserve a yearly payment and an offer a percentage of shares when Bernas is relisted again.

The Capital Markets and Services Act, paragraph 217, clearly states this: 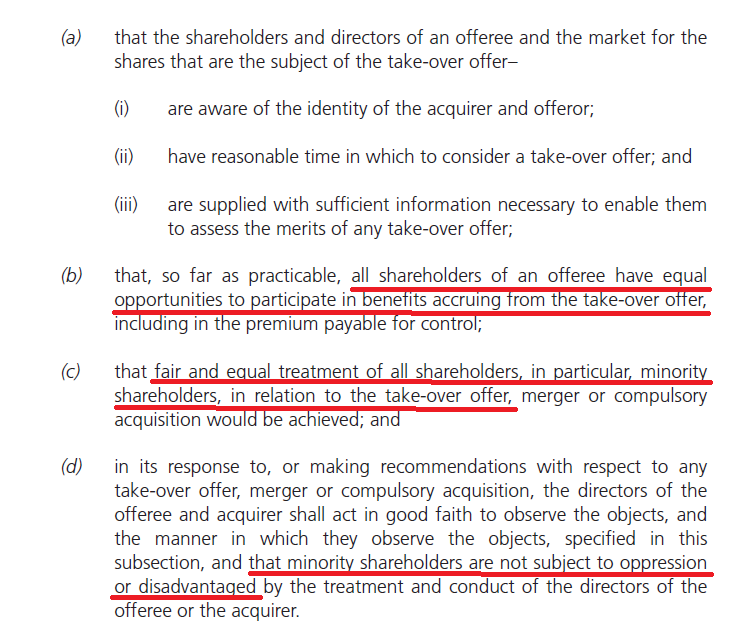 So why have the other minority shareholder not received a similar offer?

Nafas and Nekmat have in the mean time accepted the offer, according to the same article:

However, Bernas, now owned by companies related to tycoon Syed Mokhtar AlBukhari, has since bought the shares.

Because of this the public shareholding has fallen below 10% and the shares of Bernas have been suspended since March 21, 2014.


This of course will put even more pressure on the remaining shareholders, holding shares in an unlisted company is not a very attractive proposition for many.

In an interesting twist, Bursa Malaysia asked the company to clarify an article in The Edge Malaysia dated February 10, 2014, and Bernas answered:


In response to your query, after due enquiry with our Directors and major shareholders, the Board of Directors of Padiberas Nasional Berhad (“Company”), wishes to inform that as at today, the Company is not aware of any written arrangement on the following:


The statements of the Minister on one side and Bernas on the other side seem to contradict each other. The behaviour of Nafas and Nekmat (accepting the same offer offer that they refused earlier) seems to put more weight on the statement of the Minister.

Bursa Malaysia and the Securities Commission should urgently investigate this matter and show that they really practice what they preach:

"to promote and maintain fair, efficient, secure and transparent securities and futures markets and to facilitate the overall development of an innovative and competitive capital market."


On a side note, regular readers of this blog will know that I don't like these "listing-delisting-relisting games" at all, they are "played" mostly by the tycoons, at the expense of the minority investors, who hardly stand a chance. I have yet to read a good and proper reason why a company needs to be delisted and relisted, arguments given are often vague along the lines of "the need to restructure the company". The authorities really should do something about this abuse of the rules and the continued disadvantaging of minority investors.