Masterskill: why the hurry to buy into noodles, dim sum and dessert?

I wrote recently about Masterskill, "Who is Gary How".

The ink was not yet dry, or more developments followed.

First of all three directors resigned and three new directors were appointed, one of them Gary How, another his wife.

In itself rather strange, since Gary How still doesn't own any shares in Masterskill, he only owns a call option, but there is no surety that the call option (or the put option of the majority shareholder) will be exercised. Or even if he is able to exercise it, if he has the means to do that.

Some details of the background of the new directors are revealed, but mysteries remain. Searches on the investment company of Mr. Gary How (Citi-Champ International Limited) do not reveal much additional information.

The share price did react rather strong to the news though: 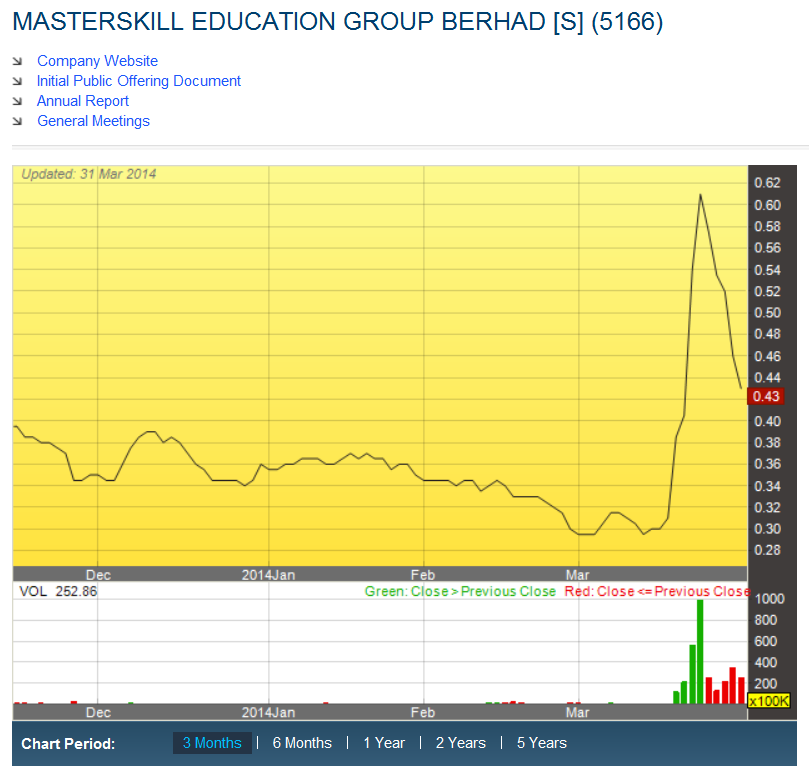 For some parties involved (Masterskill Holdings Limited, Sami Ali A. Sindi and Richard Todd Scanlon), this seemed to be the ideal moment to offload some shares, more than 44 million shares in total:

But that is not all, today another announcement came, to buy 118 million shares in Hong Kong listed company Gayety Holdings limited (8179) for about RM 20 million cash.

Regarding the future plans of this company:

For those people who dare to ask what noodles, dim sum and dessert have to do with education for nurses, I am afraid I don't have the answer to that.

The company is featured in David Webb's site because of high concentration warnings in the past, in plain English: almost all the shares were in the hands of a few parties, it was thus very easy for these shareholders to control the share price. If that is still the case, I am not sure.

For reasons that are further not explained, the parties involved seem to be very much in a hurry:

I have written the following about Masterskill in the past:

"The worsening results of the company (both in revenue and profit), exactly after the IPO (when increased profits should be expected, due to the inflow of IPO funds) and the large write-off in the last quarter are very worrisome. I hope that the authorities will consider starting a thorough investigation, if all the representations and warranties as submitted in the due diligence of the IPO and the financial accounts Pre-IPO were indeed correct."

Given the rather peculiar recent events, I think a thorough investigation by the authorities is even more warranted.