A remarkable set of events, the company has provided the following clarification:


Reference is made to the Company’s announcement on 29 June 2015 in relation to the retirement of Dato’ Dr Yap Tatt Keat (“Dato’ Dr Yap”) as Managing Director and his subsequent re-appointment on the same day.

The Board of Directors wishes to inform that Dato’ Dr Yap had expressed his intention for early retirement effective from 29th June 2015, post the Company's 13th Annual General Meeting (“AGM”) after 20 years of service with the Ire-Tex Group. Hence, he did not offer himself for re-election at the AGM.

However, due to concerns raised by key stakeholders namely bankers, customers and suppliers, to Dato’ Dr Yap's unexpected early retirement, the Board of Directors had persuaded Dato’ Dr Yap to defer his retirement plans. Consequently, in the best interest of Company, Dato’ Dr Yap had accepted his re-appointment as Managing Director of the Company in the Board meeting held immediately after the AGM. As such, he will remain in the Board until a succession plan is put in place.


Ire-Tex is a company with several, possibly large, problems.

It has just acquired subsidiaries which don't seem to be performing well at all:

There was a large variation in results, always a red flag:

Many changes in directorship in the last year: 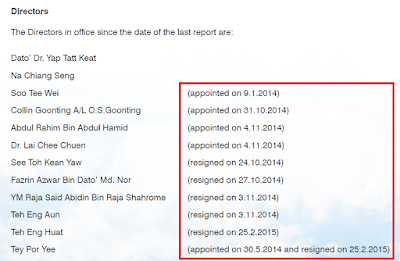 The accounts were qualified (always a large red flag):﻿

In addition to that, the following "emphasis of matter":

An investigative accountant has been appointed, with a very wide scope, 28 action points in total, including allegations in an anonymous letter.

The largest shareholder of Ire-Tex is Tey Por Yee, the third largest is Ooi Kock Aun, the same duo we already met in the Protasco affair: