I wrote before about Xidelang's previous warrant issue. 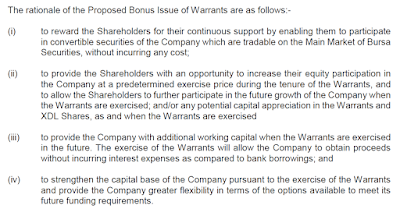 The first two are of course blatant nonsense, since all shareholders receive the same deal there is no reward for any specific shareholder.

And if all shareholders exercise their warrants, then they all have more shares, but in percentage of course still exactly the same.

Let's put it differently: Warren Buffett has managed Berkshire Hathaway for 50 years, increasing the share price from around USD 20 to around USD 200,000, a ten thousand fold increase. He did this without ever issuing warrants (or bonus shares or rights shares or any other instrument).

Can Warren Buffett be accused of not having rewarded its shareholders by not issuing truckloads of warrants?

Xidelang IPO-ed on Bursa in 2009, and the share price is still lower than its IPO price. Just to put things in perspective.

Would it not be better if Xidelang would simply mend its business, instead of bothering with the attempts at financial engineering through issuing all kind of instruments?

The third and fourth reason mentioned above are potentially "dangerous", some companies who issue warrants count on the money to come in from the exercise, but when the shares suddenly go down no warrant is exercised and the company runs into financial troubles.


The Edge Malaysia (edition July 20, 2015) published a article "Why, Xidelang?" in which it wrote that Xidelang has not adjusted the exercise price of the previous warrant of Xidelang, XDL-WB, which was issued last year, leaving it at 35 sen against the mother share of 16 sen.

The Edge writes: "as of the end April 30, none of the directors surface as the 30 largest holders of XDL-WB. Could this be the reason for the nonchalance?".

This sounds outright unfair for the holders of those WB warrants.

And strangely enough, it seems to be allowed according to the rules.


I wrote a few times about the horrific treatment warrant holders get for instance at a delisting exercise (here and here).

For minority investors in shares the environment on Bursa is already difficult enough from a corporate governance point of view. So often the big guys win.

But for investors in warrants things appear to be much worse, they don't have much rights at all.

That bags the question: is the public properly informed of this, is there a label attached to warrants warning potential investors about the lack of rights that they will have?

If the rights of warrant holders are so minimal, why can Bursa not simply do away with them? These financial instruments are simply not needed. Abolishing them will not negatively impact the Malaysian economy in any way, shape or form. If there is any impact, it would be (slightly) positive. 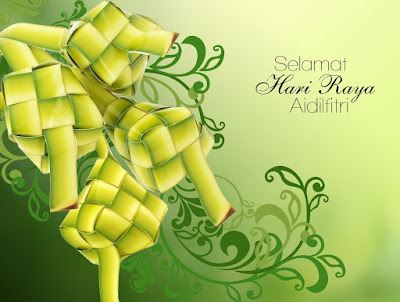