[1] AirAsia announced its quarterly results. They were not that great, but also not that bad, increased spending on fuel was a drag. Revenue was up by 11%, operating profit by only 3%. PBT was down since the previous gain on foreign exchange was this time reversed in a loss.

My worry, about which I have written before, is the very aggressive growth plans that this company has. Its capital commitments are simply unbelievable:

As if this was not yet enough, "AirAsia still wants jets after record orders".

Of course, when all goes well, this could work out very nicely for its shareholders.

But what if competition heats up (as is happening at this very moment), or a recession strikes, fuel prices / exchange rates or interest rates fluctuate wildly, the company runs into regulatory problems, etc. or a combination of these (when it rains it pours)?

The airline industry has not exactly been a bed of roses for its investors, it is a cutthroat industry where many companies having gone bankrupt.


[2] AirAsia X filed a new IPO draft document on the SC website, I wrote before about the first draft (unfortunately it has been taken of the website).

AirAsia X managed to book a profit over 2012, but only with the help of deferred tax accounting and gains on foreign exchange, without these 2012 would also have been a loss (like all previous years). To me, it completely hasn't proven its business model on the long haul flights.

Since the results of AirAsia X were not exactly rosy, the company also published its EBITDA numbers (Earnings Before Interest, Tax, Depreciation and Appreciation), showing profits every year.

Charles Munger has a very clear opinion about EBITDA:

"Every time you see the word EBITDA in a presentation, you should replace it with BULLSHIT EARNINGS, because that's what they are!"

"Yeah, why not put all expenses in the footnotes and say that "sales equals profits". Depreciation is real and it's the worst kind of expense. They will, as depreciable assets, need to be replaced."

Let's take AirAsia's as an example, the yearly depreciation is about RM 600 million, interest payments about RM 400 million, for a total of more than RM 1 billion. Not counting these huge amounts, well, let's say I full agree with what Munger said.

EBITDA is one of those financial engineering inventions from the US that better is left alone. 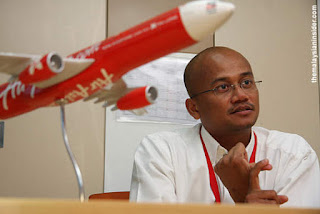 [3] On a side note, AirAsia X's CEO Azran Osman Rani spoke out (or rather: twittered) against racism, for which he ran into troubles. Needless to say, what he did was excellent, and it is a pity not more Malaysian VIPs speak out on important, national issues like racism, corruption and cronyism, controlled mainstream media, the persistent budget deficit, etc..
Posted by M.A. Wind at 17:53