I blogged before about the court case between poker star Phil Ivey and the Crockfords casino in London, owned by Genting.

The DailyMail published an article what might have happened at the playing tables, see below.

The main question is: did Ivey do anything illegal? If not, should he not be entitled to his winnings? Is it not the responsibility of the casino to check the quality of its cards and the way its procedures are executed? 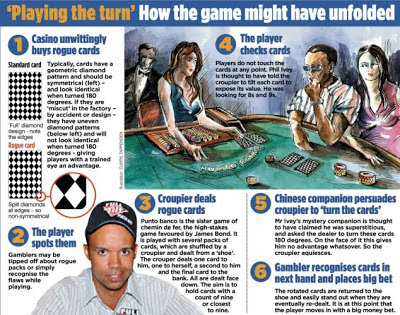 One of the world’s top gamblers won £7.8 million in a game of chance by ‘reading’ the backs of the cards, claim the owners of Britain’s oldest casino, who are refusing to pay out.

Phil Ivey, dubbed ‘the Tiger Woods of poker’, is understood to have exploited tiny flaws in the card design during a game of punto banco, a type of baccarat based purely on luck.

He insists he did nothing illegal, however, and is suing Mayfair club Crockfords in the High Court in what is expected to be the biggest legal battle in casino history.

The Mail on Sunday, which revealed last October that Mr Ivey’s winnings had been withheld, understands the cards were flawed because of a mistake during the cutting
process at an overseas manufacturing plant.

Crucially, it meant their geometric pattern was not symmetrical, though this would not have been noticeable to the untrained eye.

Cards should look exactly the same if turned 180 degrees. If they do not, it allows so-called advantage players to use a system known as ‘playing the turn’.
Posted by M.A. Wind at 10:25