Protasco: a sliver of information

I wrote before about Protasco.

It has been very quiet regarding "Protasco's Puzzling Purchase", announced in December 2012, despite an interview in which the MD said that an announcement would be made in the middle of March.

The company announced recently its audited accounts and in it can be found a sliver of information regarding the oil & gas acquisition: 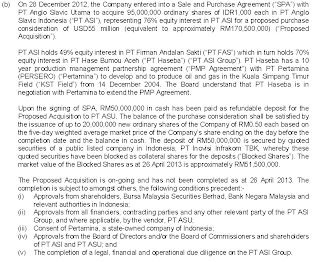 At least now we know what the securities are that are held in trust against the RM 50 million deposit: PT Inovisi Infracom TBK (a company with several directors linked to Malaysian companies). If that gives enough assurance to the shareholders of Protasco is up to them to decide. A small drop in value of the shares of PT Inovisi Infracom TBK or of the Indonesian Rupee and the collateral could be worth less than the RM 50 million deposit.

I am still quite baffled why the RM 50 million itself is not held in trust, the only reason I can come up with is that the money is actually being used for an undisclosed purpose.

We have to wait patiently for further announcements in this rather intriguing case.
Posted by M.A. Wind at 19:07