I wrote about this issue before, one snippet:


"We notice three government linked funds in the list of substantial shareholders. Will they make noise about the above remuneration? At the last AGM that did not happen, all resolutions were approved by a large majority of the shareholders." 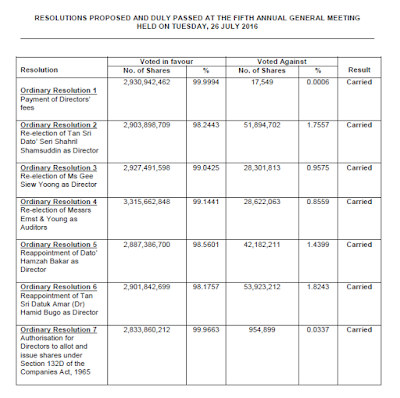 The largest vote against any of the resolutions was only 2%. 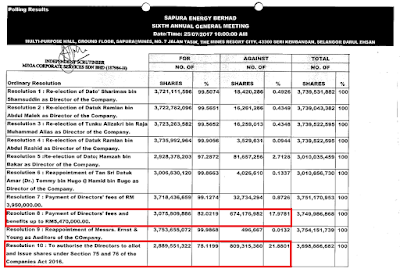 Of interest are resolutions 8 (payments of director fees) and 10 (authorising the directors to issue new shares) which received 18% and 22% of the votes against, a very large change compared to the voting behaviour of a year before.

Are these the signs of some shareholder activism which starts to pop up at Sapura Energy? I most certainly hope so.


The Edge Malaysia (edition August 7, 2017) brought up another issue regarding related party transactions. It wrote an article "A RM70 mil annual poser at Sapura", one snippet:

"It is not clear why the listed company has to pay this fee to its controlling shareholder, which has epresentatives on the board holding executive positions and are paid alaries and director fees."

Surely the minority shareholders of Sapura Energy deserve a proper explanation on the above transactions.