Maxwell: what does Mdm Li know?

I have written several times about Maxwell International, not in a very positive way, to put it mildly.

The company announced its quarterly results and again the revenue was exactly RM 0.00.

Optimists will say that it can't get much worse than that.

According to the balance sheet, the asset value per share is RM 1.00, mostly backed by cash.

So apparently not many people believe the balance sheet. I can't blame them for that.

Mdm Li, President and major shareholder, disposed of 20 Million shares at a price of RM 0.02 each.

Does she not believe the balance sheet either? If the cash is real, then surely the company can distribute it to the shareholders, who would hugely gain from it. And Mdm Li, as the controlling shareholder, can set that process in motion.

So why does she sell her shares, what does she know?

This is one of several China based companies listed on Bursa where the regulators should have acted in a decisive manner a long time ago. 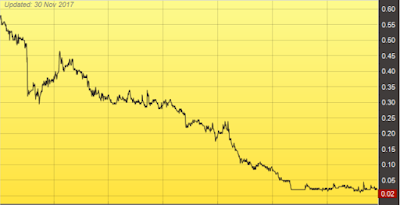 Email ThisBlogThis!Share to TwitterShare to FacebookShare to Pinterest
Labels: Maxwell