Raine & Horne: was their punishment sufficient?

I wrote six years ago: "Are SC's administrative actions a real deterrent?".

The relevant punishment by the SC can be found here. 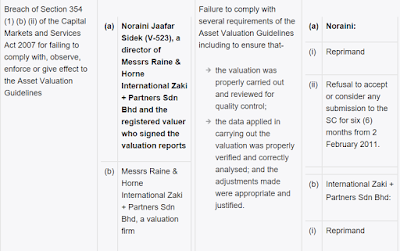 In March of this year I wrote "Land value increased 10 times in 3 years?"

"The Malaysian Anti-Corruption Commission (MACC) has arrested two former real estate executives as part of its investigation into Felda investment Corporation's (FIC) purchase of the four-star Kensington Hotel in London. MACC in a statement today said the duo were arrested at 1pm when they presented themselves at the MACC headquarters to give their statement. "Based on the investigation, the two were suspected of manipulating the hotel price (valuation) resulting in FIC overpaying tens of millions," it said. MACC said when the purchase of the hotel was underway between 2013 and 2015, the two served as chief corporate adviser and director respectively at the real estate agency Raine and Home."

Most likely the writer means Raine and Horne (not Home), a valuer that has also done many valuations regarding property owned by Bursa listed companies, so I assume that Bursa and the SC will follow this case with interest. If the allegations of the above deal are true, then other valuations done by the same people might have to be reviewed as well.

A Malaysian-based chartered surveyor and valuer hired by Mara Incorporated Sdn Bhd (Mara Inc) to assess the price of the UniLodge building in Australia in 2012, has defended its allegedly inflated A$43 million (about RM133 million) valuation.

Raine & Horne International Zaki + Partners executive director Rosli Atan told Malaysiakini he was “confident” that the survey conducted five years ago was carried out according to the proper methods.

On Aug 28, 2012, based on the A$43 million valuation of UniLodge by Raine & Horne, Mara Inc paid A$41.8 million to purchase “all interests” in a BVI company called Thrushcross Ltd, despite that the company did not legally own the building at that time.

Rosli’s valuation report was an annexure to the sale and purchase agreement of Thrushcross. The seller was Scarlett Nominees Limited, another BVI-registered company.

The UniLodge valuation raised a red flag as Thrushcross eventually bought the building five months later for only A$23.5 million – a whopping A$19.5 million lower than Raine & Horne’s appraisal.

I am sure that the reader noticed the common link in all of the above articles.

Of course, a party is innocent until proven guilty.

That brings me back to my original article written six years ago. I wrote, referring to the administrative actions (mostly reprimands) taken by the SC:

Is there any deterrent in these kind of punishments?