Article in The Star: Sapura Energy tumbles on Mokhzani’s exit

This is the second time Mokhzani is offloading its stake in an oil and gas firm. In 2015, Mokhzani’s private vehicle, Khasera Baru Sdn Bhd sold off a block of 190.3 million shares in SapuraKencana Petroleum Bhd for close to RM820mil in total.

Industry players said Mokhzani’s exit did not come as a surprise. They added that Mokhzani believed the oil and gas industry was a global issue and prefers to redeploy his resources in other investments.

Mokhzani through Khasera Baru has a 10.10% stake in Sapura Energy.

According to a term sheet, Mokhzani is looking to sell up to RM905.1mil of Sapura Energy shares.

The bookbuilding range for the offer represents 605 million Sapura Energy shares was between RM1.42 and RM1.49 a share.

The price range represents an 8% to 12.3% discount to Sapura Energy’s closing price of RM1.62 on Wednesday ahead of the bookbuilding launch.

Khasera Baru will not own any Sapura Energy shares after the sale.


"Industry players" said "Mokhzani believed the oil and gas industry was a global issue and prefers to redeploy his resources in other investments".

May be, but could this (yearly renumeration of RM 84M, most likely by the CEO) or this (RM 70M yearly fees, most likely to a company linked to the same person) while the company was losing more than half a billion RM over the last two years have to do with it?

Also taking into consideration that two resolutions were voted against by 18% and 22% of the votes, rather unusual in the Malaysian context.

The sale is suprising given that the share price is roughly at its lowest point of the last five years. Why would anybody want to sell now, especially since it looks like the price of oil has turned and oil inventories are running low? 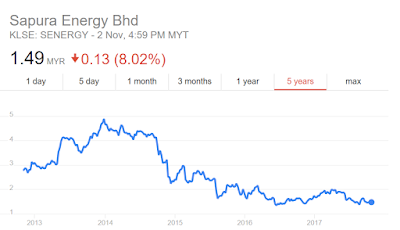 I guess there is more to the story than "Mokhzani believing the oil and gas industry was a global issue".