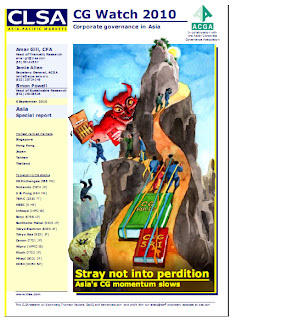 CLSA regularly publishes a report about Corporate Governance standards in Asia. Their latest report was published in 2010, it is a very interesting read:

The chapter about Malaysia starts at page 87. Some snippets:


retained its sixth spot in our rankings this year, but with a higher overall score of 52% compared to 49% in 2007. Regulators have been making steady progress in the past three years and appear more open to listening to the market. Yet doubts remain. A major issue we have is how much of this is window dressing and how much is genuine change? Will this take corporate-governance practices beyond box-ticking? These uncertainties for CG culture are why ’s CG culture score recorded a one-percentage drop this year, where as all other categories saw improvement.
An area that has improved is enforcement. The Securities Commission (SC), in particular, has been active. The score for the section increased from 35% in 2007 to 38% this year. Yet, we find that securities laws have not proved to be a meaningful deterrent against insider trading and market manipulation, as enforcement statistics show.
The two categories that showed a marked improvement this year were CG rules and practices, and political and regulatory environment, which increased by five percentage points and four percentage points respectively.
IGAAP (accounting and auditing) recorded a modest two-percentage-point increase.
In most markets, it is government efforts that lead corporate-governance reforms, but nowhere is this more obvious than in . Looking at our table comparing the scores for political and regulatory environment with CG culture for all 11 markets, the 28% gap for is easily the widest. It is this weakness in local CG culture that is holding the market back.
The SC brought three market-manipulation cases to court in the past three years - one in 2008; one in 2009; and one in 2010. The case in 2010 dated back to 2005 and the sentence imposed is being appealed by the SC, as is the acquittal of the defendants in another case in 2009. We find it hard to believe that insider trading and market manipulation happens so rarely in , unlike the rest of ."

Singapore and Hong Kong have the highest CG score, however, globally disappointing, for CG they only score tier 2 while they definitely should be in Tier 1 given their high GDP per capita. Malaysia is in Tier 3, together with countries like Japan, Taiwan, Thailand, India, China and Korea.
I agree that enforcement has indeed increased in Malaysia:
Posted by M.A. Wind at 12:14