An illustrated Dictionary highlighting the key players of the 2008/9 crisis. Some of the more well known ones including their description (which in many cases seems to be much too mild). 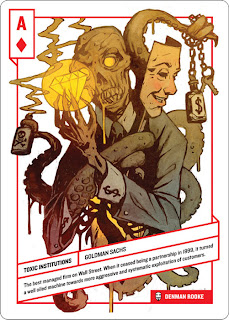 Ace of Diamonds: Goldman Sachs
The best managed firm on Wall Street. When it ceased being a partnership in 1999, it turned a well oiled machine towards more aggressive and systematic exploitation of customers 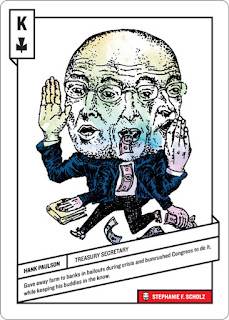 Treasury Secretary,gave away farm to banks in bailouts during crisis and bumrushed Congress to do it- while keeping his buddies in the know 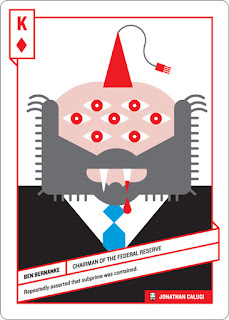 Repeatedly asserted that subprime was contained. 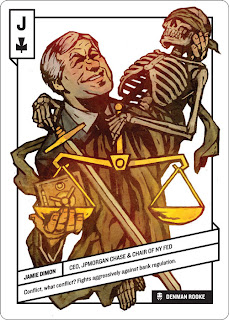 Jamie Dimon, the CEO and Chair of JPMorgan Chase, has tried so hard in the past several years to seem the “good banker.” He is so charming and gracious, yet all the while lobbying, cajoling, pushing, and wheedling to eviscerate any semblance of real reform on Wall Street. He shrugged off the cataclysm of 2008 as just something that happened, like the weather—no need for any structural reform. Chase’s balance sheet, a $2 billion loss can be absorbed. But it shows once again the impossibility of trusting the banks in the absence of structural reform and regulation to control their willingness to take almost unmitigated risk. It was Chase’s own lobbying on Capitol Hill and with the Treasury, the Fed, and other agencies that made these bets arguably permissible within the scope of hedging under the Volcker rule. Had they not lobbied and pushed and delayed and made the rule more complicated, these bets would have been illegal. 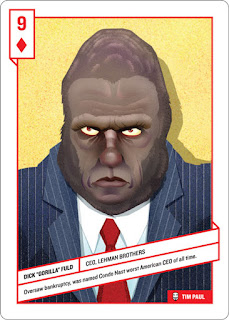 Richard Fuld was the last Chairman and CEO of Lehman Brothers. He was nicknamed "Gorilla" because of his aggressiveness. His best know quote is, " I am soft, I'm lovable, but what I really want to do is reach in, rip out their hearts and eat them before they die".

Fuld received almost $500 million in compensation from Lehman from 1993 to 2007.  As the sub prime crisis spiraled , Lehman was over-leveraged, which is to say the company had borrowed thirty two dollars for every one dollar it had. This was higher than the leverage at Goldman Sachs and Merill Lynch.

Under Fuld's leadership, Lehman lost 73% of its value in 2008 as the sub prime crisis spun out of control. When Barclay's pulled out of  a deal to purchase Lehman in August 2008, Lehman filed for Chapter 11 bankruptcy.

With $639 billion in assets and $613 billion in liabilities, the Lehman collapse was the biggest bankruptcy in U.S history. The company was party to over 900,000 derivatives contracts when it imploded. Fuld said when called before Congress , "Until the day they put me in the ground, I will wonder why we weren’t saved." 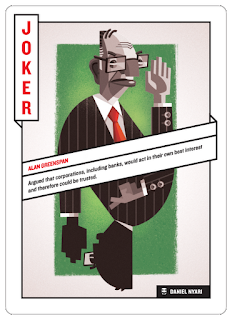 Argued that corporations, including banks, would act in their own best interest and therefore could be trusted

Email ThisBlogThis!Share to TwitterShare to FacebookShare to Pinterest
Labels: 52 Shades of Greed