Malaysia has the highest Power Distance Index in the world

At the blog of Marina Mahathir Rantings byMM I stumbled on this posting, which was completely censored by The Star: Power and the media...cut again...

Some time last year a friend gave me a very interesting book, Cultures and Organisations: Intercultural Cooperation and Its Importance for Survival by Geert Hofstede, Gert Jan Hofstede and Michael Minkov. Professor Geert Hofstede is a Dutch sociologist who studies the ways in which companies can incorporate intercultural factors in the countries they work in so that they may function better.

One of the five intercultural dimensions that Hofstede developed in this research is the Power Distance Index that looks at how much a culture does or does not value hierarchical relationships and respect for authority. The PDI measures the distribution of power and wealth between people in a nation, business and culture, and seeks to demonstrate the extent to which subordinates or ordinary citizens submit to authority. The index figure is lower in countries or organisations in which authority figures work closely with people, and higher in countries or organisations with a more authoritarian hierarchy.

Examples of countries with high PDIs are the Arab countries, Russia, India and China while those with low scores include Japan, Australia and Canada.

How does a high PDI culture manifest itself? In these countries or organisations, we would normally observe that those in authority openly demonstrate their rank and their subordinates are not given important work and expect clear guidance from above. If anything should go wrong however, those subordinates are expected to take the blame. The relationship between the boss and his subordinates are rarely close or personal.

When it comes to politics, high PDI countries are ‘prone to totalitarianism’ and class divisions within society ‘are accepted’.

On the other hand, in low PDI countries, superiors treat subordinates with respect and do not pull rank. Hence you find the phenomenon in some countries where bosses and subordinates call each other by their first names. In these countries, subordinates are also entrusted with important assignments. If something goes wrong, the blame is either shared or accepted by the boss as it is his responsibility to manage. This is why we often find company bosses in Japan or Korea resigning or even committing suicide if there is some scandal in the company. Managers also often socialize with their subordinates.

In terms of politics, low PDI countries tend to be liberal democracies and their societies tend to lean towards egalitarianism. Hence you find Dutch royalty for instance cycling around town just like everyone else.

The PDI’s measurement of inequality is defined from below, that is, it is about how the lower ranks of a society or organization accepts and expects the unequal distribution of power. This suggests that both the followers and the leaders accept a society’s level of inequality.

As an example, Germany has a 35 on the PDI scale. This means that compared to Arab countries, which rank around 80, and Austria which has a rank of 11, Germany is somewhere in the middle. German society does not have a large gap between the rich and poor but has a strong belief in equality for every citizen. This means that every German has an opportunity to rise in society.

On the other hand, the US has a PDI of 40. Although still in the middle of the scale, there is a more unequal distribution of wealth compared to German society, a gap that seems to be widening as the years go by. This explains the recent explosion of the Occupy Movement, because the distribution of wealth between the top 1% and other 99% seems to have become extremely unequal.

When you look at the PDI measurements of many countries, a pattern seems to emerge. Those at the top end seem to be less developed than others. They also seem to be undemocratic or at the very least very imperfect democracies. They are the type of countries where you are likely to see leaders who are kept both physically and psychologically distant from the masses. Apart from orchestrated events, you are unlikely to see political leaders in anything except limousines and VIP rooms.

So after reading all of this, and sensing something familiar, where do you think Malaysia stands in the PDI rankings? Do we have our leaders ‘openly demonstrating their rank’? Despite constant exhortations to ‘go down to the grassroots’, our leaders rarely are addressed in anything but the most respectful titles and terms. Some of their subordinates may take on important jobs but they will shoulder 100% of the blame should anything go wrong, even when it’s not really their fault. Our people do tend to wait for instructions from above and feel somewhat lost if we don’t get clear ones. Our mindset remains largely feudal.

Thus it should come as no surprise that Malaysia, with an index of 104, tops the PDI rankings.


And indeed, that is (according to this link) very much so since Malaysia is the only country in the dark red zone of 100-120 points. 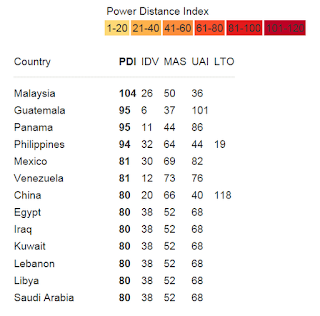 Another article about this index can be found here.

An article implying a link between corruption and a high PDI ranking can be found here:

The other face of power distance index is our blatant, in your face, 'VIP' culture. As a people, we do not seem to be sufficiently embarrassed that in a so-called democracy, we regularly accept and expect two distinct treatments meted out to two sets of people - the 'VIPs' and the lesser mortals.

Implications for good Corporate Governance (CG) are also clear, the word "equity" refers to "freedom from bias or favoritism", and each share has the same rights: "one share one vote". We need whistleblowers and not the "shoot the messenger" mentality.

The extremely high value of the PDI in Malaysia might therefore (partially) explain the lack of CG and shareholder activism in Malaysia.
Posted by M.A. Wind at 10:51