Genneva, the role of high people and the press

A remarkable article on the website of The Malaysian Insider:

He made his remarks today despite a recent explanation by Deputy Finance Minister Datuk Awang Adek Hussin in Parliament that Genneva’s liabilities exceeded its assets and that showed the company was unable to pay returns to its investors.

“I don’t know what is wrong with the Genneva thing, they claim that they aren’t operating this pyramid scheme,” Dr Mahathir told reporters after addressing the 3rd World Conference of Riba (usury) here.

“Investigate first because if you stop the transaction, people’s money will be locked out and they cannot use, they cannot even get the gold ... They deserve fair treatment.”

He also urged the authorities to regulate gold trading as he extolled the advantages of keeping and buying gold.

Genneva’s gold, which was advertised as syariah-compliant gold, was launched in December 2010 by Dr Mahathir, and a number of its traders were spurred on by the former PM’s recommendation. 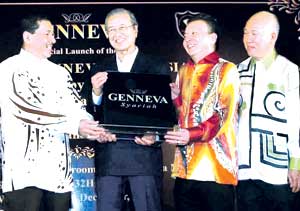 Even if they use terms like "trader" instead of "investor", "consultant" instead of "agent", that doesn't change a thing, it is just using different words. Coupled with unrealistic high returns of 24% or even 36% per year, I am 99.9% sure that Genneva was indeed operating a pyramid scheme. But it seems that Dr. M. still isn't convinced.

Dr.M. wasn't the only high person who was somehow involved with Genneva, several others were also, it appears. Since Malaysia has the highest Power Distance Index value in the world people will more easily follow the advice of high ranking people. They should therefore be more careful than usually.


Another aspect is the media, where were they? They could easily have warned the public what was going on. I did some searches on The Star, and found the following references:

A golden investment that sounds too good to be true

July 13, 2009: As the title suggested, this article gives a warning. But it is not clear in its information.

"A Bank Negara official however told Starprobe that Genneva was not licensed. He could not comment further as no complaint had been lodged against the company". Bank Negara had already started an investigation into the Bestino Group, did it really need a complaint to swing into action?

Genneva sells gold and is not a ponzi scheme, says firm

July 15, 2009: “There may be Ponzi schemes in the market but it is obvious that Genneva is not one of them,” group senior manager Tony Yao said". I am afraid that is not obvious to me. This article takes some sting out of the one published two days before.

Only one week later, on July 21, 2009 Bank Negara commenced investigations:

The Star did allow Genneva to sponsor its Penang Starwalk 2011 giving credibility to the company which it used on its website.

Glittering prospects in the gold trade

February 10, 2012: an extremely positive article (as the title suggests) about Genneva without a single warning.

"Incorporated in March 2007, the Genneva Group of companies was set up with the intention of bringing gold trading to a new level in Malaysia by breaking away from traditional models. The company’s core mission is to encourage people to trade and increase their income capacity through gold. Today, the company is represented in nine states — Selangor, Perak, Johor, Sarawak, Penang, Malacca, Negri Sembilan, Sabah, and Kedah — with seven branch and four representative offices. It also has a strong international presence within the Asian region through outlets in Singapore, China, Hong Kong, and the Philippines".

Ipoh Starwalk 2012 has struck gold with Genneva Syariah making its debut as a platinum sponsor in the annual event.

Again, Genneva is a platinum sponsor and 3 proud pricewinners are shown: 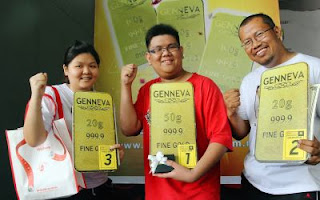 There is always a moment that a pyramid scheme collapses, when too many customers want their money back. That seemed to have happened in Singapore, as reported by this blog on September 26, 2012.

Not surprisingly (but possibly rather late), authorities raided Genneva on October 2, 2012, both in Malaysia and Singapore.

But still The Star published two letters Genneva, a new age biz model and Genneva Malaysia has never failed its customers (which doesn't seem to be true, at least in Singapore) on October 5, 2012, after the raids. Both letters where highly supportive of Genneva, should The Star really have published those letters?


Everybody is hoping for a fast and transparent investigation by the authorities. But other questions also need to be asked. Why were so many high persons involved in this case? Should the press not have done some investigative research and reporting? And should the authorities not have acted more early? And why does Malaysia appear to be a magnet for these kinds of schemes?