Received an excellent comment on the previous posting from MH Fong:

Agree with your assessment, specifically on the moral hazard element of it. There is no good reason for Astro to bail out its staff who, in this case, must be treated as ordinary shareholders.

If they do want to compensate them for the decline in share price, they must do the same for all shareholders, e.g. capital repayment, special dividend, etc. (And no, I swear I'm not an Astro shareholder).

Furthermore, I personally have issues with companies allotting IPO shares to employees; if you really want your staff to benefit, give them options instead, which at least gives them some protection from the swing in the market.

I don't think there should be a witch-hunt about who's selling down though. I disagree with positions that suggest that market volatility is a bad thing especially in a market like Bursa that is often criticised for its poor velocity.

Two things come to mine about Astro: It was overvalued and investors suspect that much and two, Astro decided against a Greenshoe, which is fairly common for IPOs of this size. I think it was a bad decision (a bad bet, if you will) rather than anything conspiratorial to forego the Greenshoe.

Finally, one last comment on the giant IPOs pushed through this year. I suspect that the decline in Astro's share price is indicative of a a new element of uncertainty creeping into share trends post-IPO, even for blue chips. And here's where I'll throw in a shameless plug for Nate Silver's brilliant book, The Signal and The Noise. Great stuff about predictability. 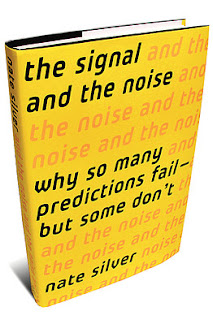 The book can be found on Amazon's website. I am afraid I have not yet read the book, although it is very much in my alley, making predictions and putting my money where my money is, is basically what I do.

Nate Silver's blog FiveThirtyEight became rather famous when it predicted the latest US elections accurately.

Where is the "Malaysian Nate Silver" predicting the coming elections, both overall and per state .....?
Posted by M.A. Wind at 09:06