"Losing Faith in Gold From Ghana to Vancouver Proves Rout"

There is an infographic from Bloomberg:

I recommend to read the whole article, some snippets:


"Gold’s swift fall, including two days in April when it plunged the most since 1980, has ravaged hopes and livelihoods around the world -- from the 1 million miners in Ghana who scour in the dirt, to thousands of executives and geologists at mining exploration firms that are running out of cash in Vancouver. Gone too are jobs for auditors, bankers and analysts in the finance capitals of Toronto and London. Investors who bet big and lost are shifting assets elsewhere and scaling back retirement plans."

"At the September 2011 peak, the market value of the world’s gold mining companies reached $486 billion, more than the gross domestic product of the United Arab Emirates. Since then, they’ve lost $271 billion, including a 71 percent plunge in U.S. shares of AngloGold Ashanti Ltd., a Johannesburg-based producer held by Paulson."

"Seitz went to London in April to raise money for his newest venture, a developer of Kazakhstan gold assets called IRG Exploration & Mining Inc. He met with eight analysts and bankers. Six weeks later, four of them had lost their jobs, he said. “In my professional career, it’s been the toughest couple years of my life,” Seitz said."


However, despite the rather negative tone in the above article, I am not bearish about either gold or the gold miners, about which I have written before. I think that this kind of article is typically written near the bottom of the market, not the top. Small, inefficient mining companies will not be able to survive at the current low prices, but the larger, better funded ones will. 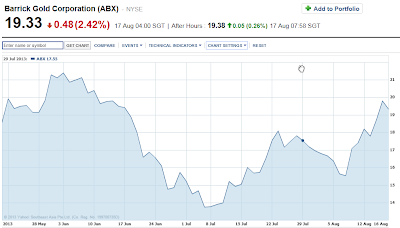 Barrick Gold made a nice run-up from it's lows (around USD 14). I have not yet sold any of my shares in Barrick or any of the other mining companies that I owe.
Posted by M.A. Wind at 17:59