Maemode: accurate predictions by Ze Moola, but why did nobody notice?


"Malaysian AE Models Holdings Bhd (Maemode) said its wholly owned unit Matromatic Handling Systems (M) Sdn Bhd had, on July 24, received a notice of termination from UEM-Bina Puri joint venture for its services in the baggage handling and sortation system at the main terminal building of KLIA2. Maemode had earlier won the RM62mil sub-contract job for the proposed airport. However, its financial position has deteriorated substantially over the past year. In June, Maemode fell into the PN17 category after defaulting on its RM100mil loan with two local banks. For the period ended May 31, Maemode recorded losses of RM195.13mil, bringing full-year losses to RM207.76mil. A huge part of its losses were due to a substantial increase in holding costs as a result of a delay in installation works on certain major projects such as KLIA2 and Keriangau Coal-Fired Power Plant in Indonesia, which also caused billings to be delayed."


Things have definitely gone downhill very fast with Maemode. The 5-year graph of its shareprice from Bursa's website (on June 28, 2013 the share was suspended): 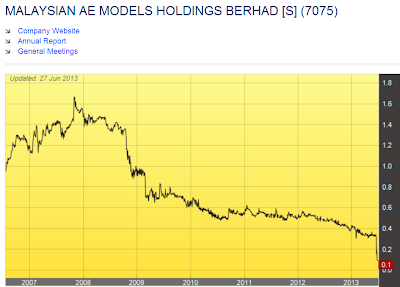 With hindsight we are all experts, and if I would write now what all went wrong, surely the reader would think why I didn't write that before.

But the sad (or interesting, depending how one looks at the situation) part is, what happened was basically all very accurately forecasted a long, long time ago, by blogger "Where is Ze Moola". All his articles about Maemode can be conveniently found here.

And wrote: "I see the classical debt built-up again."

With classical built-up he meant the typical warning signs for Malaysian listed companies (often they appear together, but not necessarily all together at once):

And with "again" he meant he has seen many Malaysian companies before with similar patterns, and it did very often end badly.

The most (in)famous one is Megan Media, which imploded under allegations of fraud, an implosion that was correctly predicted by Ze Moola. Although all was conveniently reported by Ze Moola, authorities only acted after the company went down.


"The margins are still thin. Net debt post increased yet again and the trade receivables are still ballooning at an extremely alarming rate!"


In 2010, Ze Moola gave the following chart and commented:

"And then receivables again. Look at the size of it. 341.319 million! Receivables are what is owed to the company and hey, if Maemode can collect this 341 million, then it wouldn't need that 341.111 million in loans yes? So why can't MaeMode collect its debts? And from the table, these receivables have most likely grown roots in MaeMode's balance sheet! It's so clear these receivables are in there for so long already! Why? Why? Why? What's wrong? And needless to say, if MaeMode cannot collect these debts, MaeMode will have to write these debts off!"


Journalists didn't seem to notice anything wrong at all, Ze Moola wrote this posting citing an article in The Edge, without any critical comment:


.... MAEMode net profit for the second quarter ended Nov 30, 2011 jumped 70% to RM3.34 million from RM1.97 million a year earlier, due mainly to higher revenue and better profit margins from logistics projects. The company said on Tuesday that its revenue for the quarter rose 44.24% to RM165.46 million from RM114.71 million in 2010. Earnings per share was 3.12 sen compared to 1.84 sen a year earlier, while net assets per share was RM2.21. For the six months ended Nov 30, MAEMode’s net profit surged RM7.76 million from RM2.82 million in 2010, on the back of revenue RM317.09 million compared to RM224.33 million a year earlier.  On its outlook, the company said it was confident on the improvements of the global economy that may enhance its future profit moving forward. “With the current order book and barring any unforeseen circumstances, the board is optimistic that the group will remain profitable for the remaining quarters of the financial year,” it said.


Ze Moola countered with the following:

"But the most worrying issue is stated on notes B9. Amount payable within next 12 months is 376.997 million!!"

November 2012 the company issued its 2012 Year report, "Expand to new horizons" in which a rather rosy picture was painted.

There would indeed be new horizons for the company, but not exactly as described in this report, not the ones investors like to see.

And only one month later, on June 20, 2013, time was indeed up for Maemode. Finally, the news came out in the announcement on Bursa's website:


"The Company was served with the Notice of Appointment of Receiver and Manager stating that on 19 June 2013, a Receiver and Manager has been appointed over the charged assets and undertakings of Malaysian AE Models Holdings Berhad under the terms of the Debenture dated 19th April 2012 executed between the Company and and Joint-Lead Arrangers i.e. RHB Bank Berhad (as facility agent) and Malayan Banking Berhad (as security agent)."


Even in its quarterly report on February 28, 2013 which was released on April 30, 2013 (less than two months before the company announced its receivership), the company claimed that it had RM 244 million shareholders equity (RM 132 million of which was "retained earnings"), based on RM 283 million Trade Receivables and RM 320 million "Due from customers".

Was that really a fair and accurate picture of the financial situation? I strongly doubt it.

And why did the authorities (SC, BM and CCM) not look into this situation? The tell tale signals, all described in detail by Ze Moola were all there. The authorities claim they are pro-active, but this case puts some strong doubts on that claim.

And where were the investigative journalists, sifting through the financial information, asking hard questions to the management?

As usual, the minority investors will suffer. Most likely they are looking at a total loss of their investment. On the other side, they should have done a simple "Google" and they would have found the blog postings from Ze Moola, so they only have themselves to blame.

I hope that, belatedly, the authorities will investigate this case and check what exactly has happened, if the accounts were properly drawn up, and if the auditors (Ernst & Young, who signed off on the 2012 accounts) did do their job diligently.
Posted by M.A. Wind at 11:55