MasterSkill Education Group Bhd announced its half yearly numbers today, they were even worse than the year before, the revenue has collapsed and the loss has more then doubled:

The results so far have been:

The company was listed on Bursa Malaysia in 2010, exactly at the highest point of its revenue and its profit. Timed to perfection, with true masterskill, something that is (unfortunately) not unusual for companies listed in Malaysia.

The reader should also be reminded that companies actually raise money during an IPO, in other words, profits should be clearly higher after an IPO compared to before an IPO.

Not surprisingly given these bad results, shareholders who subscribed to the IPO at RM 3.80 have not had much reason to cheer, the share is down a whopping 87%: 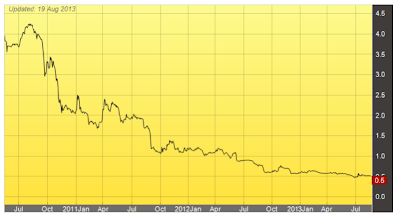 What is surprising though, is that one executive director (most likely Edmund Santhara) continued to receive generous bonuses, despite the bad results and the poor share price performance.

As written before in this blog, a whopping RM 33.5 Million was paid out in professional fees, miscellaneous expenses, placement fee and selling commission for the listing exercise.

Goldman Sachs was one of the book runners for the IPO (together with CIMB).

According to this story in The Star:

Goldman Sachs Global Investment Research, in notes to clients yesterday, said Masterskill’s “fundamentals are intact with progress made on the university campus.”

“In our view, the negativity around the stock is unwarranted, as we see minimal likelihood of cessation of operations at Cheras or of any substantial financial penalty due to ongoing litigations.”

According to the shareholder list, sellers of Masterskill stock were mainly nominee accounts held under JPMorgan, Morgan Stanley and Goldman Sachs.

In other words: Goldman Sachs itself greatly benefitted from the IPO, it recommended certain clients to buy (or at least not sell), while others (possibly other clients of theirs) were actively selling at the same time. 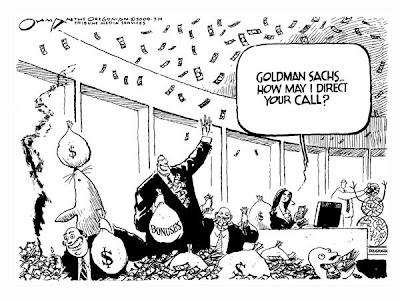 For Goldman Sachs, that's all in a day's work. For those readers that might be surprised at these kind of ethics, I strongly recommend to read the following blog post from Jeff Matthews:

...the acquisition of Bare Escentuals, a publically-traded cosmetics company (ticker BARE) based right here in San Francisco, by Shiseido, a large Japanese counterpart, for $18.20 a share in cold, hard, US dollars.

Now, as far as deals go, this really shouldn’t be an attention grabber, but stay with us while we get to the “teachable moment.”

The winners in the deal are, of course, existing Bare Escentuals shareholders, who happen to include the company founder, a private equity firm, and the many institutions and individuals who bothered buying the stock on their own free will.

The losers would mainly be short-sellers, who according to our Bloomberg are stuck with 5.3 million such shares they must now buy back (“He who sells what isn’t his’n,” as the old Jessie Livermore phrase goes, “must buy it back or go to prison”).

Another class of losers, however, would be pretty much anybody who took Goldman Sachs’ advice to sell their BARE stock just six weeks ago. Indeed, more than 5 million shares changed hands in the two days following Goldman’s early December move from the always-meaningless “Neutral” rating to the rare “Sell” rating, and the stock traded down $2, wiping out $200 million of the company’s valuation.

After all, it was Goldman Sachs who led the Bare Escentuals public offering back in November 2006, pricing 16 million shares at $22.00 a share.
And it was Goldman Sachs who successfully led a 12 million share secondary at $34.50 in early 2007, which Goldman’s crack Equity Research Team quickly followed by slapping a “Buy” rating on BARE stock, with a target price of $44.00 a share.

Three months later, it was Goldman Sachs who, once again, plugged the Street with more stock, this time selling 8 million shares of BARE at $36.50.

Finally, the Street had had enough of Bare Escentuals: the stock sold off ten points that summer and never really recovered.

But this did not deter Goldman’s Equity Research Team, for in the manner of equity research teams everywhere, Goldman’s Finest changed their “Buy” rating to a “Neutral” only after all the deals were done.

And Goldman's Finest stuck with that “Neutral”rating even while the stock performed in a decidedly non-Neutral fashion: it cratered all the way down to $2.45 a share in March 2009.

Now, you might think such a ridiculous price would have merited an upgrade: that $2.45 per-share valuation amounted to only 3-times EBITDA, a steel-company multiple for a non-steel-company-like 70% gross margin, 28% operating margin business.
Besides, if you liked it a $36.50, shouldn't you love it at $2.45?

You might think that, but you'd be wrong. In fact, Goldman kept its “Neutral” rating and thus missed a 425% rally in shares of BARE until the stock hit $13.00 a share—where Goldman’s Finest deemed the shares an outright “Sell” just over a month ago.

By our count, that’s three overpriced stock offerings and four bad research calls, for a score of Goldman 7, Public 0.

And it is here now that we get to our Teachable Moment.

You might think this sort of performance would hurt Goldman Sachs—i.e. that there might be some sort of loss of credibility in the matter of Bare Escentuals which would have a negative financial implication down the road for Goldman Sachs, Inc.

And you would already be wrong.