Yesterday I wrote about the investment schemes that are being sold by certain marketing agencies, both in Singapore and Malaysia. Coincidentally, Focus Malaysia wrote on the same day the following:


"The flyer looks harmless enough. In simple graphics, simple terms and bad grammar, the reader is told he or she will get a return of 3% every three months on fixed payment dates, from "proven track records". That is 3% per quarter, or 12% a year. All one has to do is invest a minimum of RM 10,000 to buy crude oil.

It looks simple enough but how does a person like me, who isn't a commodities trader, buy crude oil?

The information on the flyer tells me the investment plan has been carried out, with success, in another country. Apparently, this scheme has "successfully raised over Euro 300 mil" through its "11,000-strong client base in Germany, and has distributed over Euro 37 mil to investors".

How the investment plan works is, I will be buying physical crude oil at a 3% quarterly discount from an established Canadian oil and gas (O&G) company, from its existing producing oilfields. The company will then sell the oil to its clients at the "normal" rate, which means an automatic 3% in my pocket.

A quick Google search reveals the Canadian company is under investigation in Germany for a similar investment scheme. According to an article in the German BusinessWeek, the company running the crude oil investment scheme denied a request for financial statements and was not forthcoming in revealing its shareholders, which raised questions. It is also questionable that the company aims at investors outside Canada instead of where its home base is.

If this company is under investigation in another country, why is it being allowed to run its investment scheme in Malaysia? Do we have loopholes in our legal framework which can be easily manipulated by those looking for a quick buck?

The story is old. Malaysians have seen it time and again. We have seen schemes in every possible form - plantations, gold, property, offshore investment. We all know someone who has lost money in similar schemes.

For all we know, the crude oil investment plan could be legitimate. But that is exactly the issue - we don't know. And we will not know - until it is too late. What is being done to protect investors from being ripped off?"


I am pretty sure the writer, Farah Saad, refers to the crude oil project as detailed here on Infinity Treasures website, which also goes by the name "Proven Oil Canada".

Pity that Focus Malaysia doesn't give the details, since readers should be informed. That is exactly one of the problems in Malaysia, a press who is (often) not sharp enough, and doesn't mention the alleged perpetrators, enabling them to flourish. "Name them and shame them" works wonders, but of course good enforcement is also needed, something that is problematic in the Malaysian context.

On the "Lowyat" forum more information can be found here.

It seems the investment started in Germany, and, according to the Wirtschafts Woche ("Economy Week") magazine, the scheme has run into severe problems. Unfortunately for the readers (and fortunately for the promoters in Malaysia and Singapore), these articles are all in German. Although my German knowledge is slightly "rusty", I will try to translate (with the help of Google) some of their hard hitting findings.

Proven Oil sued the magazine (as mentioned in the fourth link), but only a few sentences had to be amended, the huge majority of the claims was rejected. Proven Oil had to pay 80% of the cost of the court case, Wirtschafts Woche only 20%. With that Proven Oil had basically scored an own goal, since every one who would still sell the investment product in Germany should by now know what they were selling.

"Most of Berlin's oil funds stopped the payouts to their investors."

"If you look closely, the investment idea turns out to be robbers gun: The self-presentation of Conserve Oil is outrageous, in the balance sheets it crunches. And who immerses himself in the network of companies of the Canadian oil barons will come up with the name of Jürgen Hanne. He became known in Germany as he aimed big before the year 2000 with real estate funds for nursing homes. "Dr. Hanne funds" were a disaster for investors. Hanne was convicted of fraud and fled on parole to Canada."

"Prior to his real estate career in East Germany Hanne was already in the oil business. In a similar way as today's Proven Oil tries to catch investors: promising high returns, suggesting guarantees, collecting money and first cashing in himself. From the money invested around 20 per cent goes to "additional costs"."

"In fact, the management should know more about olive oil than normal oil - both Conserve Oil chief Crombie and his vice Yoshiki Nakamura come from the hotel industry.

Questions about their qualifications were not answered"

"What happens to their money, investors Proven Oil can barely comprehend. Their German fund companies do not invest directly in Canada, according to the scanty information in the annual reports. More revealing would be the balance of the property companies in Canada, in which the fund companies participate. Their balance sheets do not get sent to the investors."


The below scheme shows how Hanne, his sons (Sebastian Hanne and Alexander Gramatzki), his trusted lieutenant (Jurgen Hainzl) and wife (Monika Galba) are all part of the not transparent organisation scheme: 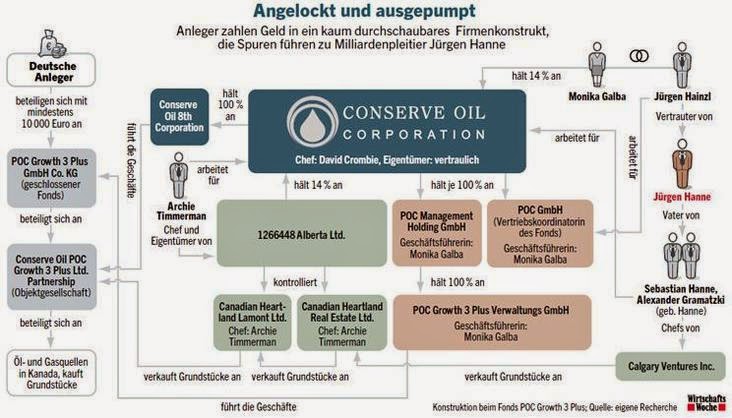 The below new property scheme from Bridge Cap shows how Hanne and David Crowbie (both from Conserve Oil Corporation and the Proven Oil project) are interconnected with the Helwerda's from Sproule, the company that was supposed to independently verify the oil claims of Proven Oil. That independence looks now highly questionable. 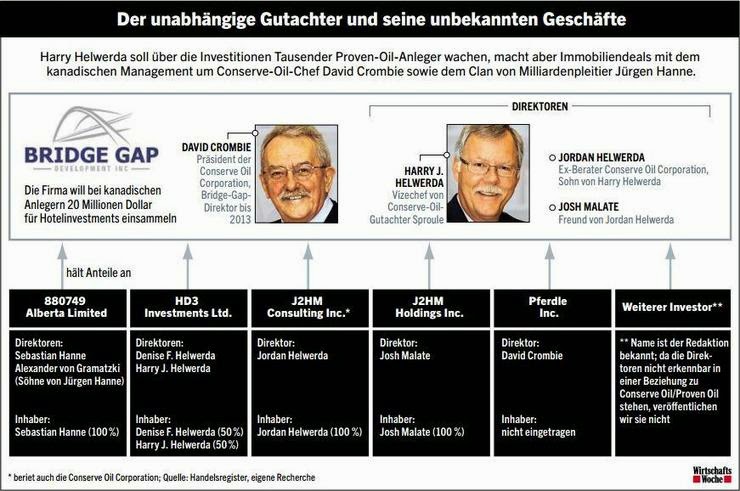 In my previous blog article it seemed that "The Exit Scheme" has run into problems and has stopped payments in Singapore.

According to the above, the "Proven Oil Canada" scheme has similar issues and most of the funds have stopped payments in Germany.

Bridge Gap wants to collect another 20 Million dollar for a hotel project in Canada. Any takers?