Update: please check out this blog for all oil & gas related matters.


Tanjung Offshore has been in the news lately.

First of all there is an article in The Star: "A tale of two waivers".


Waivers should only be granted in exceptional and extenuating circumstances. One wonders what is the basis for Tanjung Offshore Bhd asking for two significant waivers: one from Ekuiti Nasional Bhd (Ekuinas) against a non-competing clause and another from the Securities Commission (SC) to waive the requirement for Tanjung Offshore’s new shareholders from having to make a mandatory general offer (MGO) despite buying up more than 33% of the company.

Tanjung Offshore is in the midst of a reverse takeover (RTO) exercise that will see it buying marine vessels from several parties who would end up with more than 33% of the company. Tanjung Offshore is seeking a waiver from the MGO rule. A group of minority shareholders, on the other hand, are opposing this.

It is difficult to fathom why Ekuinas should grant Tanjung Offshore a waiver. Ekuinas had done right by including the non-competitive clause after paying a whopping RM220mil for Tanjung Offshore’s OSV assets.

Ekuinas’ planned floatation of Icon Offshore Bhd (which is essentially the asset it had acquired from Tanjung Offshore) already has some challenges in the form of seemingly toppish valuations and one report questioning the certification of some of Icon Offshore’s vessels. The last thing it would need is having another competitor creep into the same sector.

As far as the MGO waiver is concerned, it should be opposed as minority shareholders should be protected in this deal by offering them a chance to exit the business at the same price the new shareholders are buying into the company.


I like to draw the readers attention to the word "whopping". To put things in perspective, these assets were injected into Icon Offshore, a company that will IPO at a valuation of RM 2.2 Billion. In other words exactly ten times the price that Tanjung received for its assets. I have to admit, there were other assets in Icon Offshore, and Ekuinas might have injected funds or loans into Icon Offshore. But still, there is a huge valuation gap, and I would not immediately assume that Tanjung received a whopping amount. My guess is that the deal in 2012 was very good for Ekuinas, not so much for Tanjung Offshore. That assumption is also based on the fact that part of the IPO proceeds of Icon Offshore will go towards its existing shareholders and part will be used to shore up its balance sheet.


“The directors have a bad track record when it comes to striking deals, and this transaction does not look good,” Chuah told The Malaysian Insider yesterday.


My guess is that Chuah was referring to the sale of its assets to Ekuinas in 2012.


"If Tanjung is exempted from the MGO, the new owner or investor will become the controlling shareholder. This means we don't have the option of cashing out and will have to go along with whatever deal that is struck.” Chuah said that with the RTO, Tanjung is expected to return to the same business it disposed of two years ago, as Bourbon is involved in marine vessel services. Chuah fears that the minority shareholders would be asked to cough out extra cash in order to complete the deal, and questioned why they were excluded from the deal.


The CI is currently in record territory, but the share price of Tanjung Offshore has languished, despite being in an industry that is perceived to be quite "hot" these days. The company did pay out a dividend of RM 0.44 in 2012, which explains the sudden drop (the share going "ex"), but other then that, the share has performed very disappointingly. Another indication that things have not gone very well for the company. 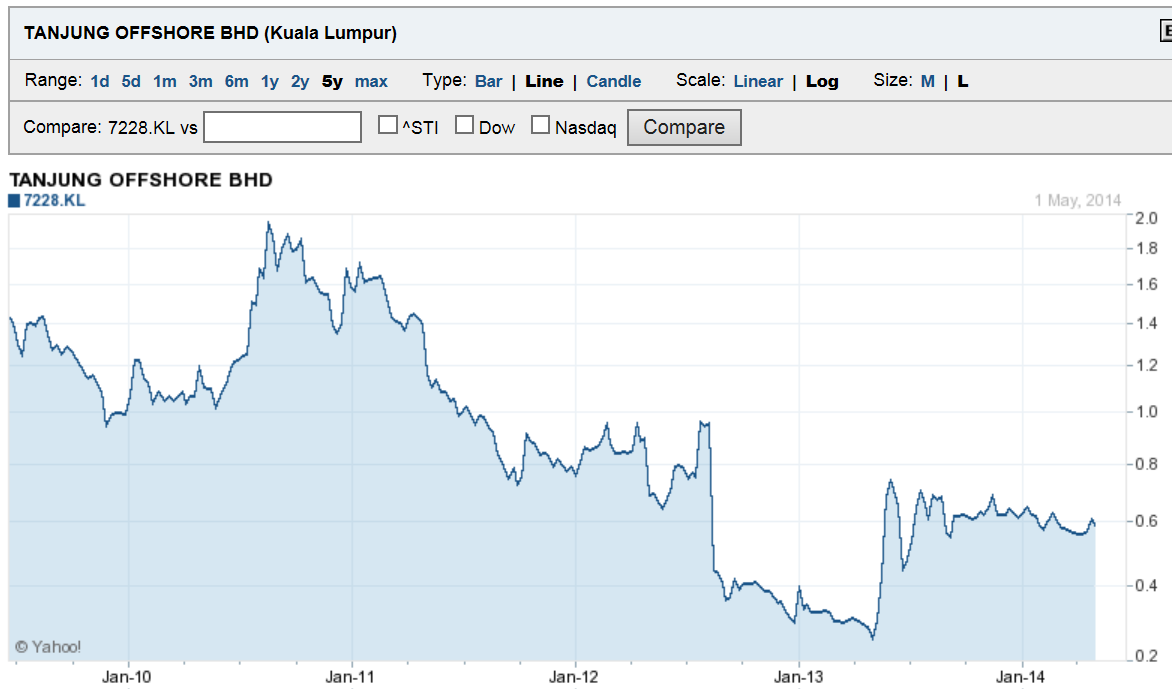 For me, I have some doubts about the industry. The perception seems to be that there will be lots of growth due to "juicy" contracts by PETRONAS. I doubt that these contracts will be that juicy. Next to that, it seems every single company in this business is raising money to further increase its fleet. Somehow or the other, that doesn't make much sense. And lastly, activities onshore have hugely increased (for instance in North-America) recently through the use of "fracking":
Hydraulic fracturing is the fracturing of rock by a pressurized liquid. Some hydraulic fractures form naturally—certain veins or dikes are examples. Induced hydraulic fracturing (also hydrofracturing, fracking, and fraccing) is a mining technique in which a high-pressure liquid fluid (usually water mixed with sand and chemicals) is injected to a wellbore in order to create small fractures (usually less than 1.0 mm wide) in the deep-rock formations in order to allow natural gas, petroleum, and brine to migrate to the well.
Posted by M.A. Wind at 13:25