Liew Kee Sin: there is a conflict of interest

For the first time it seems that Liew Kee Sin has admitted that there is a clear conflict of interest in his business dealings. 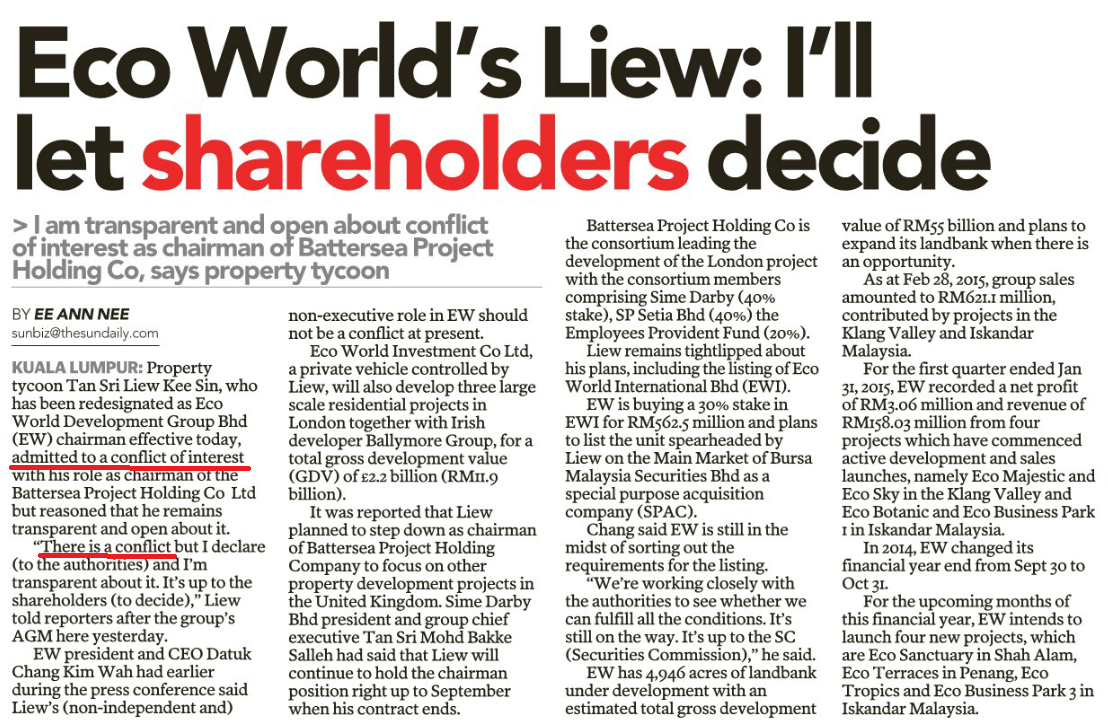 Liew was of course very much involved in property developer SP Setia, where troubles started about 3.5 years ago when PNB made an offer.

While still at SP Setia Liew was getting involved in another property developer, Eco World.

Later on Liew resigned from SP Setia, but still stayed on as chairman for the Battersea Project Holding in London.

Liew allegedly said “There is conflict but I declare (to the authorities) and I’m transparent about it,” The Sun reported Liew as saying. “It is up to the shareholders (to decide).”

Not sure which shareholders he was specifically referring to, since he is involved in so many companies.

First and foremost this appears to be an issue that has to be handled by the boards of directors of all companies where Liew is involved.

The question is of course, how does Liew deal with all the inherent conflict of interest situations. For instance:

All not exactly far fetched scenario's.

Every director has a fiduciary duty to act in the best interest of his company, how can one juggle this duty for so many companies (engaged in the same industry) at the same time?

One publication that has consistently been critical about this conflict of interest is Kinibiz. It's latest article (behind pay wall) in this matter can be found here. A previous 5-part series of articles can be found here, with the most important questions being asked here.

I am afraid I very much agree with the critical comments brought up in those articles.

Unfortunately, in the Malaysian context, this conflict of interest is not exactly unique, it occurs quite often. The many Related Party Transactions (and probably many more transactions that are related but not indicated as such, which is even worse) are a testament to that.

It has always been quite puzzling for me why founders in Malaysia not just focus their efforts on one single company, but seem to be involved in many companies, with large overlaps in business dealings.
Posted by M.A. Wind at 19:49