Regarding Cliq: The Edge wrote an article "Potential adjustment to price of Cliq’s QA". Some snippets and comments:


Ahmad Ziyad said that if a disparity between the oil price and the purchase price still exits in March, the assets’ price tag may be adjusted by 5% of the current amount, or no less than US$218.5 million.


Five percent adjustment is not that much, the impact of the lower oil price on the price should be much higher, in my opinion.


When asked why Phystech was willing to sell its assets, Ahmad Ziyad said: “They think that all this while they have not realised the full potential of the field.”


That is not what I hoped to read, better something like: "there is enormous potential, but the company has not enough funds to explore, so Cliq will purchase new shares in the new SPV with which new exploration wells will be drilled, old machinery will be replaced by new, efficient ones".


I have been very critical of SPACs from the start, I am afraid I have not yet seen any reason to change my mind in this matter. 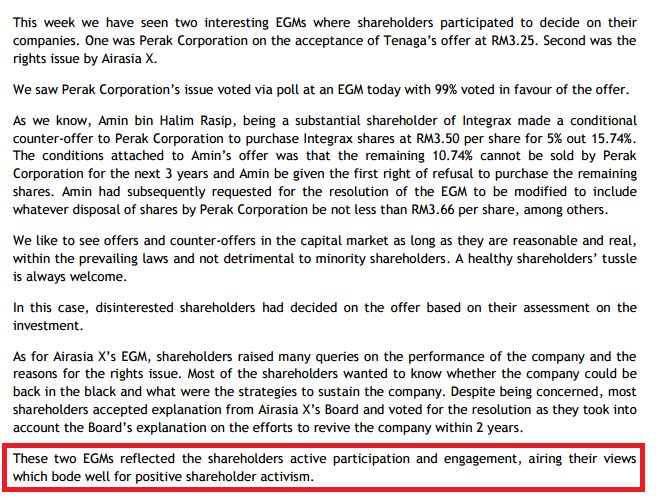 That is indeed good news. However, I like to note that Amin is a large shareholder of Integrax. For small shareholder (in the absence of large shareholders fighting to get a better deal) there should also be enough venues to participate in shareholders activism. In some countries I have noted class action suits, taken up by an organisation similar to MSWG, with large amounts of minority investors chipping in. That scenario still appears far away in the Malaysian context.

Common sense says no. In fact the law also says this should not be. But this scenario is exactly what has unfolded with regards to SP Setia chairman Zaki Azmi.

Zaki, a former chief justice, holds 19.12 million shares in Eco World Development Group as of Jan 22, according to the latter’s latest annual report. On that date this corresponded to 3.77% of Eco World’s outstanding shares base, making him the third largest shareholder, and was worth RM37.2 million at Friday’s closing price of RM1.95 per share.

And it was not just Zaki. Eco World’s latest annual report also reveals that SP Setia’s two foremost management executive — acting CEO Khor Chap Jen and acting COO Wong Tuck Wai — holding 2.29 million and 1.53 million shares respectively as of Jan 22 this year. The shareholdings come to 0.45% and 0.3% respectively of the outstanding shares base at that point.

This raises pressing questions of conflict. Foremost is why Zaki and company are apparently turning their backs on the obligation for company directors to actively avoid positions of conflicting interests under Section 132 of the Companies Act, which stipulates that directors must use “reasonable diligence” in the discharge of his duties.

Worse, this rubs salt onto SP Setia’s festering wounds after a massive talent drain to Eco World, which is now counting a legion of former SP Setia men — all the way up to the top — as among its directors, top executives and most of its workforce.


It is indeed rather strange and worrisome, the investments in Eco World of the persons mentioned above are substantial. Will that have an impact in their acting in the best interest of SP Setia?