Regarding my previous posting about this matter, it seems I wasn't the only person who had questions regarding Cliq's announcement.

Bursa queried the company with 8 highly relevant questions, which Cliq answered, some in a convincing way, some less so.


5. Justification in using the URALS oil prices forecast in the economic modelling, given that the price of oil has dropped substantially in the recent months


The price of Brent Oil over the last six months: 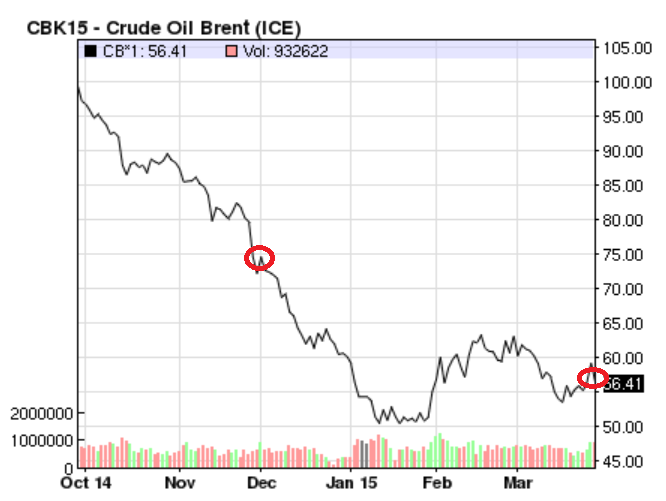 It shows quite a difference, the current price (USD 56.41) is about 20% lower than the one used in the first announcement (USD 70.90). Since there are fixed expenses the gross margin must therefore be much lower.

AGR believes that the oil price will rise in the next 5 to 6 years. That might happen, but still, the base price is 20% lower, which should have quite a large impact on the near future projections, and thus the DCF valuation.


7. The financial information as required under Paragraph 19(d)(ii) and (iii) of Part A and Paragraph 1 of Part H, Appendix 10A of the Main Market Listing Requirements of Bursa Securities

The financial information set out in Section 3 of the Announcement is for information purpose only and may not reflect the future financial performance of the SPV as the BTA entails the transfer of the Vendor’s assets (excluding liabilities, payables, cash and receivables) including Subsoil Use Contract, contractual obligations and certain existing employees to the SPV. As such, the SPV does not assume any prior liabilities arising from the Proposed Acquisition. In addition, the SPV has yet to be incorporated as at to date.

The disclosure of financial information of Karazhanbas Northern Field based on the financial statements of Phystech pursuant to Paragraph 19(d)(ii) and (iii) of Part A and Paragraph 1 of Part H, Appendix 10A of the Main Market Listing Requirements of Bursa Securities (i.e. profit before tax, profit after tax and minority interest, shareholders’ funds and total borrowings) may not be applicable in view that the Company is only acquiring the asset of Phystech.


That might be strictly speaking correct, but is still disappointing. The assets are generating financial numbers in the Profit & Loss and are valued in the Balance Sheet, and one would thus be interested in the full picture, not in some "selected financial information".

Some of these will help in evaluating the assets to be acquired in the SPV, others are meant to form an opinion about the company that CLIQ will work together with (for instance its ability to keep its side of the bargain).

As mentioned before, a proper snapshot (past and current, balance sheet, profit & loss, description) of a company should not take more than a single page.


8. Financial information of Karazhanbas Northern Field based on the latest unaudited accounts for 2014

The financial information of Karazhanbas Northern Field based on the latest unaudited financial statements of Phystech for the FYE 31 December 2014 is not available at this juncture as the management of Phystech is in the midst of finalising the same.


That is disappointing, negotiations started in December 2014, that should give the company ample time to have the books ready by now.

Please note that The Edge wrote that "In 2013, Phystech recognised earnings before interest, taxation, depreciation and amortisation (Ebitda) of US$22.61 million.".