1MDB accounts "are audited by an international firm"

Article from The Malaysian Insider:


Debt-laden 1Malaysia Development Berhad (1MDB) insisted today its accounts are audited by an international firm, saying it reserves the right to sue those making malicious and slanderous statements against the government-owned strategic investor.

The company broke its silence after senior banker Datuk Seri Nazir Razak yesterday told its board to appoint independent auditors or resign over a RM42 billion debt. "

The Board would like to stress that 1MDB accounts are audited by an international audit firm, Deloitte, " it said in a statement issued in capital Kuala Lumpur tonight.

What possibly could go wrong?

Well, let's start with "The dozy watchdogs" written by The Economist, some snippets: 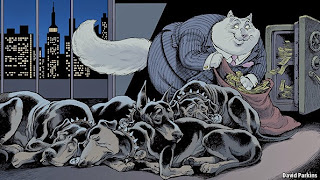 PwC’s failure to detect the problem is hardly an isolated case. If accounting scandals no longer dominate headlines as they did when Enron and WorldCom imploded in 2001-02, that is not because they have vanished but because they have become routine. On December 4th a Spanish court reported that Bankia had misstated its finances when it went public in 2011, ten months before it was nationalised. In 2012 Hewlett-Packard wrote off 80% of its $10.3 billion purchase of Autonomy, a software company, after accusing the firm of counting forecast subscriptions as current sales (Autonomy pleads innocence). The previous year Olympus, a Japanese optical-device maker, revealed it had hidden billions of dollars in losses. In each case, Big Four auditors had given their blessing.

And although accountants have largely avoided blame for the financial crisis of 2008, at the very least they failed to raise the alarm. America’s Federal Deposit Insurance Corporation is suing PwC for $1 billion for not detecting fraud at Colonial Bank, which failed in 2009. (PwC denies wrongdoing and says the bank deceived the firm.) This June two KPMG auditors received suspensions for failing to scrutinise loan-loss reserves at TierOne, another failed bank. Just eight months before Lehman Brothers’ demise, EY’s audit kept mum about the repurchase transactions that disguised the bank’s leverage.

The situation is graver still in emerging markets. In 2009 Satyam, an Indian technology company, admitted it had faked over $1 billion of cash on its books. North American exchanges have de-listed more than 100 Chinese firms in recent years because of accounting problems. In 2010 Jon Carnes, a short seller, sent a cameraman to a biodiesel factory that China Integrated Energy (a KPMG client) said was producing at full blast, and found it had been dormant for months. The next year Muddy Waters, a research firm, discovered that much of the timber Sino-Forest (audited by EY) claimed to own did not exist. Both companies lost over 95% of their value.

Of course, no police force can hope to prevent every crime. But such frequent scandals call into question whether this is the best the Big Four can do—and if so, whether their efforts are worth the $50 billion a year they collect in audit fees. In popular imagination, auditors are there to sniff out fraud. But because the profession was historically allowed to self-regulate despite enjoying a government-guaranteed franchise, it has set the bar so low—formally, auditors merely opine on whether financial statements meet accounting standards—that it is all but impossible for them to fail at their jobs, as they define them. In recent years this yawning “expectations gap” has led to a pattern in which investors disregard auditors and make little effort to learn about their work, value securities as if audited financial statements were the gospel truth, and then erupt in righteous fury when the inevitable downward revisions cost them their shirts.

The modern audit does not even provide an opinion on accuracy. Instead, the boilerplate one-page pass/fail report in America merely provides “reasonable assurance” that a company’s statements “present fairly, in all material respects, the financial position of [the company] in conformity with generally accepted accounting principles (GAAP)”. GAAP is a 7,700-page behemoth, packed with arbitrary cut-offs and wide estimate ranges, and riddled with loopholes so big that some accountants argue even Enron complied with them. (International Financial Reporting Standards (IFRS), which are used outside the United States, rely more on broad principles). “An auditor’s opinion really says, ‘This financial information is more or less OK, in general, so far as we can tell, most of the time’,” says Jim Peterson, a former lawyer for Arthur Andersen, the now-defunct accounting firm that audited Enron. “Nobody has paid any attention or put real value on it for about 30 years.”


Those conflicts of interest

Even so, the misaligned incentives built into auditing all but guarantee that accountants will fall short of investors’ needs. The beneficiaries of the service—current and prospective shareholders—pay for it indirectly or not at all, while the purchasers buy it only because they are required to. As a result, companies tend to select auditors who will provide a clean opinion as cheaply and quickly as possible. Similarly, accountants who discover irregularities may be better off asking management to make minor adjustments, rather than blowing the whistle on a misstatement that could embroil their firm in costly litigation.