Maybulk: large paperlosses on its investment in POSH (3)

Maybulk published its 2014 year report. Two excerpts, the first from the Chairman:

And from the CEO: 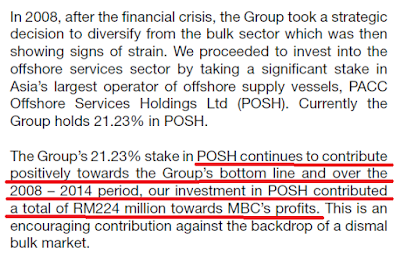 This is in rather stark contrast to what I wrote before (here and here) about the hundreds of millions of paper losses that Maybulk should book on its investments.

Was I wrong? Unfortunately, I was not.

"Hidden" deep in the report, somewhere in the notes on page 66 we find the following: 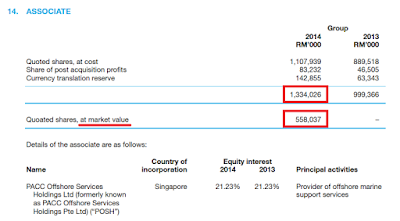 So Maybulk is indeed sitting on a huge paper loss of about RM 780 Million, according to market value!

However, while Buffett marks to market the Berkshire Hathaway accounts for 50 years, Maybulk decided not to write the investment down. Apparently they think they know things better than Buffett.

The reasoning can be found here:

Based on price-to-book ratio?

Firstly, they haven't bothered to substantiate the reasoning by numbers, what is the price-to-book, how are other companies in the same industry valued to their book value? Disappointing, since we are talking about a RM 780 Million difference, not exactly peanuts.

Secondly, POSH is indeed trading at a discount to it's book value, but only a discount of 30%. If we correct for that factor, then the valuation still doesn't even come close to the RM 1.3 Billion for which it is valued in the books.

Thirdly, POSH has USD 295 Million of intangibles on its balance sheet, due to take overs it made in the "goldilocks" period before the global financial crisis.

If POSH is indeed overstating its balance sheet (by not writing down its intangibles), then that will result in low ratio's of profitability (earnings compared to assets and equity), and that seems indeed to be the case:

Although 2014 was a difficult year for the industry, 2011 until 2013 were fine, and the ratio's should have been clearly higher. These are really low indicators, they might even be lower than the cost to borrow funds, which doesn't make sense. Why borrow money to buy assets that yield less than the interest rate to be paid?


Maybulk's year report is very disappointing in that is does not want to face reality, although it was expected:

"Will the 2014 year report give more information on this subject? I doubt it, but hope to stand corrected."

It is the first year report after the IPO of POSH, the first time an objective (market) value is available for it's huge investment.

Nowhere in the report is the decline in price of POSH quantified (for the benefit of the readers of this blog: it is 59% down compared to its IPO price). Nowhere in the management discussion it is mentioned that the market value of it's investment has occurred huge paper losses.

This is important, since the investment is for a large part held for 6.5 years, that is rather long.

But also, Maybulk could have sold the shares in POSH for a profit a bit more than one year ago, but it decided not to do that and even to add further to the position at the IPO price, which looks like a very expensive mistake.

What was started in 2008 through a RPT has led to a huge destruction of capital, at a moment when there was in fact a huge opportunity. Not many companies had the luxury to sit on top of RM 1 Billion cash in the middle of the global crisis. Now the company is sitting on a large paper loss while having a net debt position, and has cut it's dividend to a measly 1ct.