Great presentation by James Grant, one of the good guys. I subscribed to his newsletter, but unfortunately had to discontinue it, since it was too US centric and the recommendations too often involved bonds (I always have been more of an equity guy). 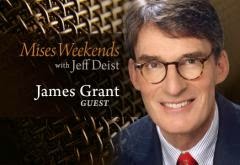 If you've never heard of the Depression of 1921, it's because the federal government and the (then new) Federal Reserve did the opposite of what they did in 2008: federal spending was cut, the federal budget was balanced, and interest rates were allowed to rise. In other words, real austerity measures were implemented. The result? A short economic contraction that healed itself.


Also interesting is his remark about John James Cowperthwaite:


He was asked to find ways in which the government could boost post-war economic outlook but found the economy was recovering swiftly without any government intervention. He took the lesson to heart and positive non-interventionism became the focus of his economic policy as Financial Secretary. He refused to collect economic statistics to avoid officials meddling in the economy.


In line with this is Marc Faber's comment that close to 100% of the economic data is collected by institutions like the FED and national banks. These are institutions that are not exactly known to rock the boat, so we should have a healthy dose of scepticism regarding their numbers.
Posted by M.A. Wind at 22:08