Chairman "had something to do", company down USD 19 Billion

Losing a few Billion, it can happen to the best, but losing USD 19 Billion in 24 Minutes, that is pretty tough, even if it is just paper value.


“Chairman Li [chairman and majority shareholder] did not attend the AGM,” said T.L. Chow, an external spokesman for Hanergy. “He had something to do.”


FT has written several times about this company, for instance about its suspicious group structure and the frequent trading between holding company and subsidiary: 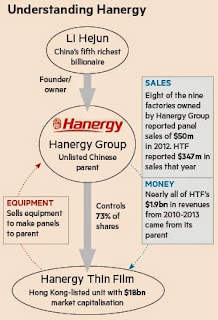 FT also reported about the remarkable rise of the share price in the last ten minutes of each trading day (which used to be for years a familiar pattern in the Malaysian context): 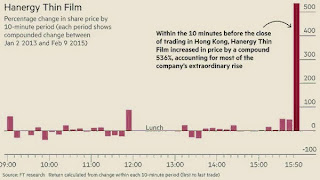 Hanergy accounts for revenue and profits on a "percentage of completion basis", which is earlier than actual invoicing. At 30-Jun-2014, Hanergy had net tangible assets of HK$8,023m, of which $4157m was gross amounts due from contracts with Hanergy Affiliates (revenue which had not been billed) and $1914m was receivables from Hanergy Affiliates. It had also made prepayments to Hanergy Affiliates of $1540m for photovoltaic modules for solar power plants (Hanergy is going downstream), most of which had not been delivered. Add that all up and you see that $7611m, or 95% of the net tangible assets, are accounts with Hanergy's parent group. So not only is Hanergy in a bubble at 15 times its NTAV, but most of the NTAV depends on its parent group not defaulting. The listed company pays its parent in advance, but gets paid in arrears, heavily supporting its parent.


Bloomberg reported that shorting of speculative shares can horribly backfire:


Short sellers bowed out on Hanergy Thin Film Power Group Ltd. at just the wrong time.
Wagers against the Chinese solar-panel maker fell to 3.1 percent of its outstanding shares on Monday, the lowest level since December 2013, just before the stock slumped 47 percent in 24 minutes on Wednesday in Hong Kong to erase about $19 billion of value. Short interest dropped from 2014’s high of 5.1 percent, data compiled by Markit Group Ltd. show, as bears capitulated amid a 162 percent gain in the stock this year.

“Those who shorted Hanergy in the past got squeezed because it kept going up,” Andrew Sullivan, head of sales trading at Haitong International Securities Group, said in Hong Kong. “While there was a wall of money supporting the stock, it was very difficult to short.”