AirAsia to MAS: Your Loss is my Gain

Received the following research report from a friend: 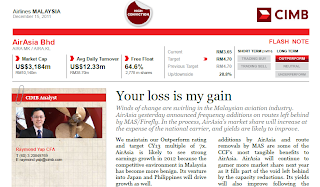